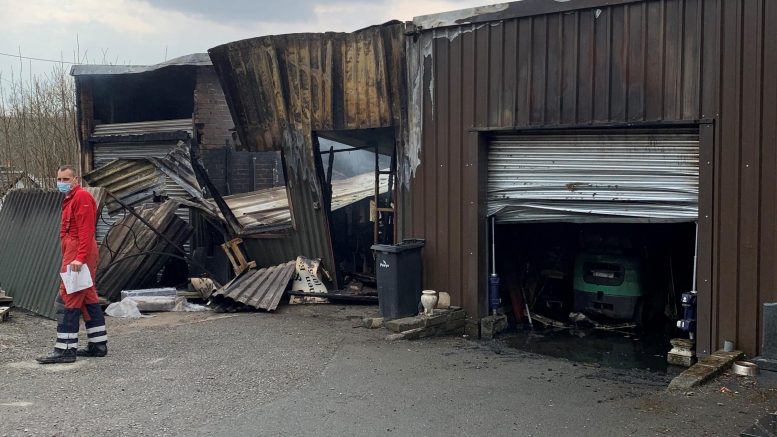 THE owner of a business that has stood in a Radnorshire town for more than 130 years has praised its community spirit after rallying round the firm following a devastating fire.

The fire engulfed a warehouse at Ben Lloyd & Son, a monumental masonry in Rhayader, shortly before 10am on Tuesday, April 20, destroying expensive equipment such as a forklift, quad bike, sandblaster and compressors, while wiping out the business’s newly-installed computer system.

Jim Lloyd, whose grandfather Ben opened the Bridge Street business in 1886, said the firm had been providing continuous service ever since. And, thanks to the generosity of the local community and Jim’s family, the business has not lost a step, despite the fire – moving into a unit on the East Street Industrial Estate in town.

“When the fire occurred things looked bleak, but we’re back up and running,” beamed Jim, who has run the masonry for almost 50 of the family-run firm’s 134 years.

“My nephew owns the unit and has let me move in. He’s an electrician and we’re sharing the space. The family have been brilliant and the response from whole community has been wonderful. The whole community came together and we’ve had lots of offers of help. Rhayader really does have a superb community spirit.

“The move is temporary until we can rebuild. We don’t know how long we’ll be here, we need to sort the insurance on the original building, which will be six months perhaps.

“It was only five weeks before we were back in production and we’ve not lost any business, which is great news. We’ve still been sorting out customers and it’s been going well.”

Police evacuated everyone from the property and surrounding area as the fire ripped through the premises, with the road closed as fire crews arrived to tackle the blaze.

Having been in the family for so long, Jim said the Bridge Street site holds particular significance for him and his loved ones.

“It was way back in 1886 when my grandfather started the business and we’ve been providing 134 years of continual service, it’s very much a special place,” he added.

“We have wonderful views of the river from there and we want to get back there as soon as possible. Part of it is not terribly damaged, the newer building. That could be up and running quite soon.”

Mystery surrounds the origin of the fire, with Jim previously explaining he’d come in to open up at about 9am, gone to visit a local builder for 10 minutes, and by the time he returned the warehouse was ablaze.

“When I came back the flames were coming out the front door,” said a shocked Jim, who was still wearing his fire-damaged gilet.

A charred quad bike sat in the yard as the warehouse continued to smoulder at around 1.45pm, with the framework all contorted and blackened by the blaze. And Jim estimated the fire has caused thousands of pounds worth of damage.

Cousin Wyn Lloyd, who often helps out at the business, has been coming down to see cousin Jim every morning for a cup of tea for the last two decades, but had never been greeted by what he saw that Tuesday.

“There was nothing more we could do when we got here. Not a damn thing,” said Wyn.

“It was terrifying. Even if you’d had a sprinkler system in there it wouldn’t have touched this beast.”