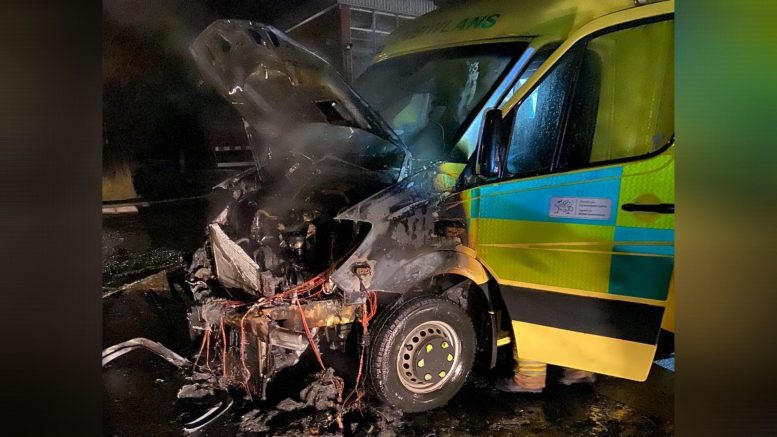 An ambulance was badly damaged when it caught fire in Llandrindod Wells.

Fire crews were called to put out the blaze at the ambulance station near Llandrindod Wells Hospital at around 6.15pm on Thursday (January 7).

A firefighter later tweeted that quick action taken by the crew prevented the fire from spreading to oxygen cylinders on board the vehicle.

No-one was injured and an internal investigation will take place, a Welsh Ambulance Service spokesperson said.

Mid and West Wales Fire and Rescue Service said the cause of the fire was accidental.

“The vehicle in question was an ambulance and was well alight, suffering fire damage to the engine compartment and cab,” a MAWWFRS spokesman said.

“Firefighters accessed the rear doors of the ambulance in order to evacuate the oxygen cylinders, that were housed in the vehicle, before they were involved in the fire.”

Welsh Ambulance Service have thanked firefighters for putting out the fire.

A WAS spokesperson said: “Yesterday evening, the engine area on one of our emergency ambulance vehicles outside Llandrindod ambulance station caught fire.

“Colleagues from Mid & West Wales Fire and Rescue Service were called immediately and safely extinguished the blaze, for which we thank them.

“We are glad to report that no persons were injured during this incident. An internal investigation into the cause of the blaze will take place in due cause.”

Craig Thomas, Head of Operational Response for Powys Command at Mid and West Wales Fire and Rescue Service, said: “Good work and quick attendance ensuring the incident did not escalate, such a shame for Welsh Ambulance Service have a truck off the road.”

18:16hrs this evening Stn 13 📟 and 13P1 mobilised to a vehicle fire at Llandrindod Ambulance Station… 🚒🚒 The quick action taken by fire-fighters prevented fire spread to Oxygen cylinders on board the vehicle… 💦💦 @craig_thomas111 @mawwfire pic.twitter.com/JTTSV7zYiL