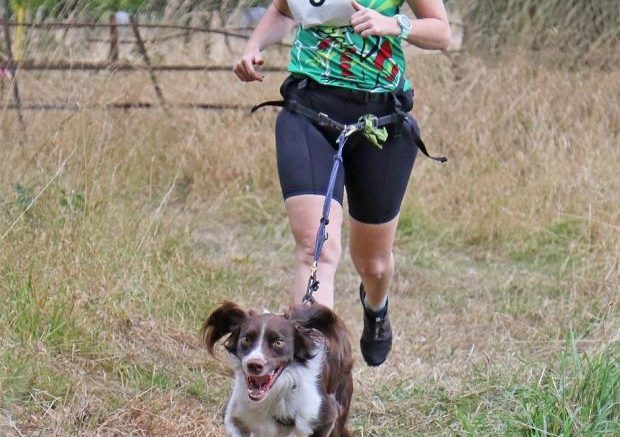 MOST people will know that if you breed a Labrador and a Poodle together, the offspring will be a Labradoodle, or a Springer and Cocker spaniel mix will produce a Sprocker.

But what do you get if you cross two avid dog mums who love taking their pooches out on long runs in the breathtaking Mid Wales countryside with a desire to find like-minded people who do the same thing? The answer is Builth Wells Canicross club – the brainchild of Lauren Rees and Beth Curry.

Beth, originally from the Rhayader area, moved back to Powys earlier in the year and, having discovered the sport of canicross – combining cross country running with your dog/s – while living in the Forest of Dean, she was keen to find a local club back home.

Via Facebook she was put in contact with Lauren, originally from Bridgend but who also moved to the Powys area earlier this year, who had run a canicross group back home.

That was in September and a month later the Builth group was born.

“I had been wanting to set up a club to find people to run with, as I was missing running with company,” said personal trainer and sports therapist Lauren, who moved to Aberedw, near Builth Wells, in March, to be close to her boyfriend.

“When I was tagged in Beth’s post on Facebook, it was perfect timing and we set about starting up the group.”

Canicross originated in Europe but has become hugely popular in the UK in the last two decades – so much so that in 2008 Crufts included a canicross section for the first time.

Following the first-ever canicross event being staged in the UK in 2000, the maiden UK National Championships followed six years later while Cirencester hosted the European Canicross Championships in October 2012. The International Canicross Federation Championships, meanwhile, have been running for well over 20 years.

Your dog is attached to you through a harness and a lead attached to a belt you wear. In Europe bikejoring and skijoring, where participants cycle and ski with their dogs, are also popular.

With its beautiful rolling countryside and endless hills, footpaths, forests and fields, Mid Wales is the perfect place to take up the sport.

Lauren in race action with Zephyr.

“Mid Wales has such a wide variety of areas to explore while canicrossing,” said Lauren, 36, who came across canicross quite by accident seven years ago when trying to find solutions for exercising her Parson Russel Terrier, Muffin, who she once spent three hours trying to coax out of a badgers sett.

“She kept going down rabbit holes when I took her out and after one particularly annoying walk, whereby it took me three hours to get her out of a badgers sett, I decided I needed to rethink her exercise.

“I’m a keen runner and decided to take her with me to burn some energy. I didn’t realise it was a sport until I was browsing the internet and came across canicross races.”

Living in Hampshire at the time, Lauren began competing, including racing twice in France, but when she moved back to Wales four years ago to start her own LVR Core Fitness business, she discovered no-one really knew about canicross. She soon founded the Bridgend Cani-Runners Facebook group – which quickly rose to 350 members – and, as part of her professional training, hosted introduction to canicross events.

Muffin, 13, is retired now so Lauren keeps active with her three-year-old English Springer Spaniel and Collie cross, otherwise known as a Sprollie, Zephyr.

“We are incredibly lucky to not only have the miles of tracks on the hills surrounding the Builth area, but flatter routes along the Wye Valley Walk,” she added.

“Since moving here I have explored so many areas with Zephyr, it’s great to have his company on the trails.”

The Builth group currently has 15 members but Lauren and Beth are hoping that will soon change, like it did with Lauren’s original Bridgend group.

Fitness enthusiasts in the area may already be familiar with Lauren’s Boatside Bootcamp classes, an outdoor fitness facility based at the Boatside Holiday Campsite in Aberedw. And now, she is organising two canicross sessions over the coming weekends for any dog owners keen to explore the sport.

Canicross Bootcamp is being held this weekend, November 21-22, which will be a more intense and advanced session, and an introduction to canicross is being organised for Saturday, December 5, which will be held on the Groe, in Builth, from 9.30am.

All details for the events, as well as the Builth Wells Canicross group, LVR Core Fitness and the Boatside Bootcamp, can be found on the relevant Facebook pages.