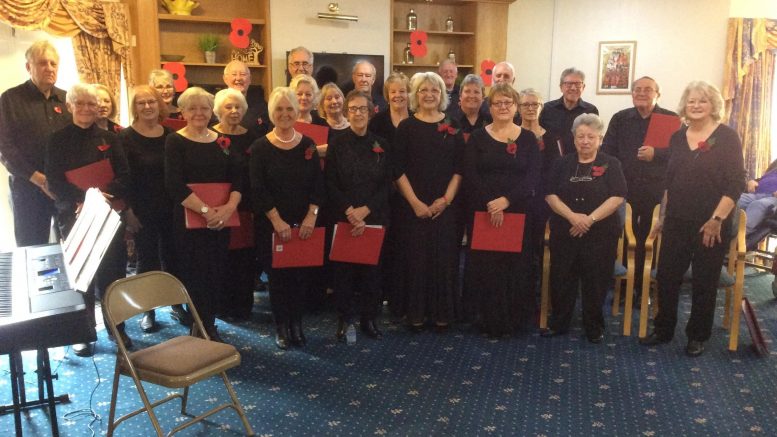 THE Covid-19 pandemic may have left most of us singing the blues, but lockdown restrictions haven’t stopped a charity’s musical group from remaining in tune with each other.

Thanks to Zoom, the Bracken Trust Singers have been meeting up every week – with leader Christine Clarke virtually conducting a 16-strong choir on Monday mornings.

The group’s members head to their lyrical sanctuaries – or wherever there’s room for a laptop in their homes – promptly by 10.30am on the first day of the week and there are no excuses for not having had time to practice or study the sheet music as Christine informs them of what songs they’ll be belting out a week in advance.

Over the last few months the group have covered a variety of favourites, including Elvis Presley’s ‘The Wonder of You’, John Denver’s ‘Take Me Home Country Roads’ and Marie Osmond’s ‘Paper Roses’.

“This year we’ve not been able to do anything so this is the next best thing as we’re not able to lead our normal lives right now,” said Christine, who is accompanied by Bev Nethercoat on piano.

“Ann (Williams, manager at the Llandrindod Wells-based Bracken Trust cancer support centre) suggested meeting over Zoom four or five months ago and now we have about 16 of us meeting on a Monday.”

Countless Powys residents have been using Zoom and other social platforms to catch up with friends and loved ones this year, and while there can be myriad technical difficulties at the best of times due to poor internet signal because of bad weather or the fact members are at various locations across Powys, an additional issue for the group is that all singers mute their microphones so accompanist Bev’s piano is the only sound heard, as well as his wife’s singing, allowing choristers to find their tone.

But, despite any technical glitches, Christine says it’s been a fantastic way to keep in touch and keep everyone’s spirits up – especially with all group members being of retirement age.

“I can keep an eye on people which is important,” said Bev, 72. “I’m one of the oldest, everyone’s age ranges from mid 60s to early 80s. Everyone has really enjoyed the opportunity to sing and get together.”

The weekly ritual helps to strengthen friendships and allow members to check in on one another, which is particularly significant for a group containing many people who have been forced to shield for the majority of the pandemic.

The living room performers have even been joined by an array of international artists too – including from France and as far away as Australia.

“One singer’s wife and son are stranded in Australia so they join in, as does my step-daughter who lives in Lyon, while my other daughter and grand-daughter often join us from Doncaster.”

The Bracken Trust Singers have become a hugely popular addition to the trust’s legacy, ever since they first performed eight years ago, an event Christine attended, and when the group was just two members strong.

“I joined as a volunteer, having had experience with Newtown Musical Theatre Company,” said Chris.

“The Bracken Trust wanted ideas for Christmas entertainment. It all started when we were asked to accompany one patient who was doing a walk for life in Knighton. That was our first concert, around April or May 2012, and we’ve done many more since. Probably over 50 concerts altogether.

“At the start there were two of us, then six and now we’re up to 30 members.”

They have entertained and tried to raise awareness, as well as funds for the trust, all over Wales, and even released a couple of CDs – the first one a few years ago raised £1,000.

The group are happy to still be active during the pandemic, but Chris admits they are desperately missing their outings and seeing people. They haven’t performed at a concert in nearly a year – last December – with the Bracken Trust Festival of Song scheduled to take place in September 19 in Llandrindod duly cancelled.

A regular appointment is at Rhayader care home Crosfield House, which members are missing in-particular.

“We’re regulars at Crosfield House which has been a lifeline for the residents and a humbling, joyous experience for us,” added Bev.