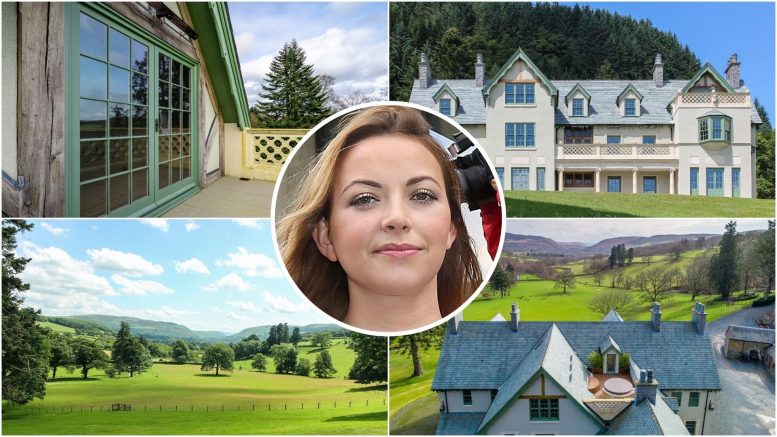 We first reported in March that the 35-year-old singer, who has sold more than 10 million records worldwide, was rumoured to have splashed out £1.5 million on the stunning Rhydoldog House, just outside Rhayader, which has its own helicopter landing area and was sold by clothing magnate Ms Ashley’s family in 2009.

The estate was bought by the late fashion designer – who died in 1985 – and her husband Sir Bernard in 1973, as the couple wanted to raise their family and be near to their fledgling business in Carno.

Estate agents McCartneys confirmed the property was ‘under offer’ on its website, which changed to ‘sold’ days later.

Now, Ms Church has given details of an exciting new project that is set to transform the picturesque 47-acre Elan Valley property into a community that will help people “reconnect with themselves and the natural world” following a turbulent year brough on by the coronavirus pandemic.

The Voice of an Angel star revealed the plans on her Instagram account earlier on Tuesday (May 25), with a link to a Rhydoldog House website that gives further details of the exciting new project. Ms Church plans to create a community welcoming people from all walks of life and provide an array of activities for them to enjoy; from Mixed Martial Arts, spiritual healing practices like yoga, to creating a space for writers, musicians and artists, as well as a host of other activities like cycling, archery, foraging, hiking, strength and conditioning training and star-gazing; while she also plans to introduce a hot-tub, plunge pool and outdoor cinema.

On her Instagram Stories, Ms Church said: “At Rhydoldog House, a small, democratic building community is welcoming volunteers to live, work and learn on a radical and inspiring new wellness project: building an accessible, zero-emissions, off-grid, healing retreat centre in the heart of Wales. A short drive from the spectacular Elan Valley dams.

“Immersed in 47 acres of dramatic ancient woodland, surrounded by waterfalls, red kites circling above and beneath an internationally recognised dark sky, we are offering a huge array of activities and disciplines for people looking to reconnect with themselves and the natural world after the last year of lockdowns.

“Our vision for this community is one that can support the physical, spiritual, mental and emotional needs of all its members. If this sounds like something you’d be interested in, please check out our website. We’d love to hear from you all.”

A further statement on the website reads: “Our community will be held together by a system of non-hierarchical participatory democracy, where each member of the community has the right to an equal say and vote on decisions about how the community is run.”

Rhydoldog House has seven bedrooms over three storeys and is in need of complete renovation. In addition to the house there is a 200-year-old barn that will be converted into a large hall for gatherings and events, with a row of four guest houses and an artist’s residence.

The house currently draws 80 per cent of its energy from an onsite hydro-mill, and plans are also afoot to install solar panels to make up the other 20 per cent. A fundamental part of the mission is to be as sustainable and have as little impact upon the environment as possible.

Ms Church expects the work to convert the property into a retreat to take 12 months, with the completion date expected to be around June 2022.

Ms Church, a former childhood classical singer who branched out into pop music in 2005, became associated with the gorgeous Radnorshire home when she was reported to have commissioned legal searches on the property earlier this year. Within days, it was sold, although McCartneys remained tight-lipped on the identity of the buyer.

Initially on the market for £1.8m, Ms Church – who has two children with ex-Wales rugby star Gavin Henson and married musician Johnny Powell in October 2017, with whom she had a daughter last August – is said to have made her offer after the price was dropped by the owners.

Rhayader Town Council were so inundated with enquiries about the possibility of the Cardiff native buying the local property at the time, that they issued a statement asking members of the public to refrain from contacting them to make further requests.

Ms Ashley, the late former owner, opened her first shop in Machynlleth in 1960. After purchasing Rhydoldog House, it would accommodate high-level company board meetings as well as some of Wales’ most lavish parties.

At the height of the company’s success, the house was used as the backdrop for the fashion brand’s iconic photo shoots of clothing ranges, while the surrounding grounds were said to have inspired the designer’s famed floral prints.

Ms Church and her partners are welcoming applications from people to join the project. “We are asking interested individuals to submit a short application – one side of A4 or a short film or audio file,” said a statement on the website.

“You will need to tell us about your skills, experience, values, and why you want to be a part of this project. No skill is without value, so please declare all skills when applying for a position.”

For more information, visit the website at https://rhydoldog.wixsite.com/my-site, while you can email your application to rhydoldog@gmail.com.