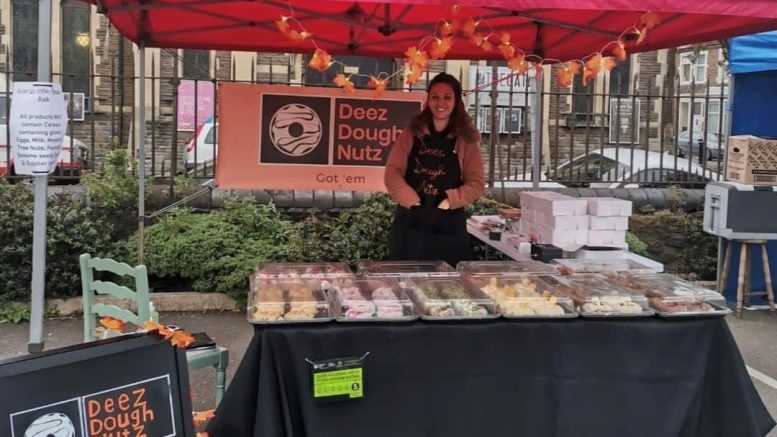 THE pandemic has meant doom and gloom for most of us but one Radnorshire woman, who’d never even baked bread before last June, has used her loaf to quit teaching and start her own business.

Chloe Paosila-Jones’ doughnut business is thriving since leaving teaching and going full time in October – and it all started from her mum’s kitchen in Llanddewi.

The 26-year-old psychology graduate had never been a baker but felt like learning a new skill when she was furloughed from her teaching job for most of 2020, and started tinkering in the kitchen – but admits she was so bad to start with that her doughnuts felt and looked more like rock cakes.

But, encouraged by her family and boyfriend Sam, she slowly improved and mastered the art, and even started selling her doughnuts in Cardiff at the weekends. She was doing so well that by the time October came around and she was back at her normal job she decided to leave the classroom for good and enter the kitchen full-time – launching Deez Dough Nutz.

“I’d never made cakes before or bread, or anything. I had absolutely no idea you had to fry the dough,” said Chloe, who started experimenting last June at her Cardiff Bay home.

“I just thought I’d pick up a new skill seeing as I was on furlough and it was lockdown.

“The first few batches were terrible, they looked like rock cakes. But I taught myself, by taking a Tesco recipe and tweaking it. I eventually got better and would post pictures and people would ask me to make some for them. Then, they kept coming back.

“I’d come home from Cardiff to Mid Wales and friends would message me and give me lots of orders. At first I thought maybe I could use it as a way to make money outside of work, on the weekends.”

Pretty soon though, the former Llandrindod Wells High School pupil was earning more at weekends than she was being on furlough in her full-time job. Sam and her family pushed her to take a leap of faith, but Chloe was still hesitant, even though she wasn’t happy. What if it all went wrong?

She graduated university in 2018 with a degree in psychology and a masters in forensic psychology, did she want to turn her back on all that work? But, she knew she wanted more than working as a teaching assistant at a school in Ebbw Vale, catching a train every morning at 6.30am and feeling exhausted when she returned home in the evenings

“I went back to school in September but by October I’d been back a month and I just wasn’t enjoying it or the long hours at all,” she added.

“I had been applying for other jobs but not getting anywhere, and I was feeling quite low and that was kind of my rock bottom moment.

“I was earning more on the weekends doing something I enjoyed and being my own boss so during the half term holiday I decided I wasn’t going back. I quit and went into business full time – thanks to encouragement from Sam and my parents. I felt like I had nothing to lose.”

Chloe selling Deez Dough Nutz at her stall in Cardiff.

But Chloe proved she’s a smart cookie and started looking into the legal side of starting up her own doughnut company and learning about the business side, enrolling on a few courses. And being young and internet savvy helped. Via her Instagram account, she contacted food bloggers who offered to promote her product.

Now she splits her time between Powys and Cardiff – where Deez Dough Nutz has a presence at community markets in capital city suburbs like Rhiwbina, Roath and Riverside from Friday to Sunday.

There, Chloe leases a stall among other street food vendors then usually comes home to Llanddewi during the week to where it all started, mum and dad Julia and Martin’s kitchen.

Just because she’s her own boss, that doesn’t mean she can put her feet up and count the profits though. She’s still a one-woman team and typically spends about 40 hours a week baking and trading at the markets, plus an additional 10 hours per week doing admin, taking care of deliveries and ICT work.

In an average week Chloe estimates that she makes roughly 500 doughnuts. They sell for £3 each or you can buy four for £10, with vegan options available. And the most popular item is the Lotus Biscoff doughnut, followed by her Kinder Hippo and Crunchie creations – all of them mouthwateringly tasty and looking mesmerising.

It’s been a crazy year and you might think someone would have to be even crazier to start a business from scratch during a pandemic. But, just like the yeast required for her doughnuts, Chloe has risen to the occasion and is already dreaming of the future.

“I’d like to start a postal service because lots of people have asked about it, so that might be the next step, and then I’d like to maybe supply a coffee shop,” added Chloe.

“Maybe within the next two years I could have a shop of my own, either in Cardiff or back home in Llandrindod. Eventually, why not both.”