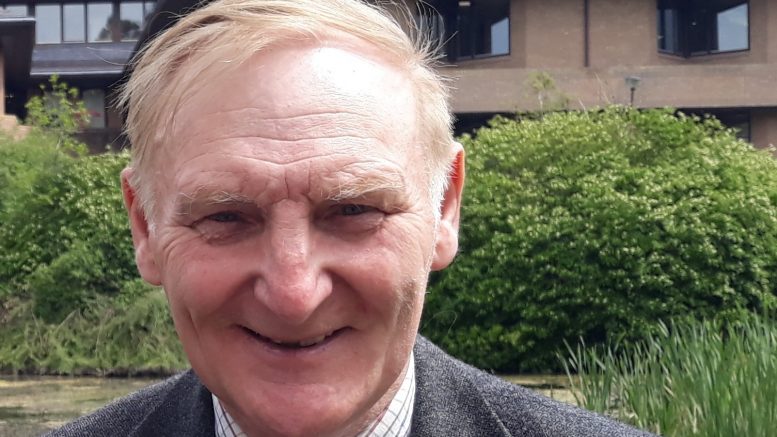 A POWYS county councillor says he is lucky to be alive after contracting coronavirus.

Gwilym Williams is recovering now after being struck down by the virus in February and has since had his first Covid-19 vaccination, but he was more concerned at being hit at the worst part of the year for any farmer – lambing time.

Councillor Williams, who represents the Disserth and Trecoed ward on Powys County Council, attended Hereford County Hospital initially but was sent home as his breathing seemed fine. It was only when he returned to his Blaenglynolwyn farm, near Newbridge-on-Wye, that the virus took hold, leaving him bedridden for two weeks. His wife also contracted Covid – despite having received her first jab – as did son John, leaving the family’s 700-sheep farm in a disastrous position just a week before lambing season began.

Cllr Williams says he is eternally grateful to his other son Luke and daughter Mary for putting their busy lives on hold to look after the farm while he was laid up. He also thanked fellow councillors and members of his ward for the dozens of cards, emails and phonecalls he’s received in recent weeks.

“I feel a hell of a lot better, but I’m not completely recovered,” said the 70-year-old, who recently left the council’s Conservative group to join Action for Powys in protest at the latest increase in council tax.

“It was a nightmare as it was right at the beginning of lambing. I fell ill around February 8-9, we started lambing on February 15,, but I couldn’t do anything for two weeks, it took me a month to be able to really do anything.

“I was in hospital in Hereford. I was in a few days but they sent me home because they said it was just as well to be at home as I wasn’t too bad then. But then it got worse when I got home and I was in bed for two weeks.

“The wife had it too, despite having had her first jab, but she still got the virus. Then my son John, who I run the farm with, had it and he wasn’t very well at all, his stomach was bad and he was in hospital; he was so bad we had to go call an ambulance for him.”

Younger son Luke, an electrician, and daughter Mary, a manager at Llandrindod Wells-based mental health charity Mind, stepped up to the plate to make sure the lambing period has run as smoothly as could have been expected when their father became ill.

“I’m grateful to Luke and Mary, who both had to take time off work,” added Cllr Williams.

“It’s a real nightmare because you can’t get people outside the family in to help and you aren’t allowed to have people come and see you because you’re shielding, and it’s not like a normal illness that just affects one person, it wiped three of us out.”

Cllr Williams has since had his first dose of the vaccine and, despite his illness and incapacity, the farm should finish lambing in another two weeks.

“I’m still suffering with it but I’ve had my first jab now and I’m feeling a lot better.

“I didn’t have to go on a ventilator but I was sweating terribly and had no energy. I can do a reasonable day’s work now but still not as much as I usually do and I have to have a lie down in the afternoon.

“I’d like to thank everyone for all the emails and cards I’ve had from members of the ward, as well as calls. There’s been dozens. It’s really meant a lot.”

Cllr Williams even returned to civic duty a little over a week ago when he attended a full council meeting on Friday, March 19.

Council chairman Gwynfor Thomas, from Llansantffraid, said: “I would like to welcome Cllr Gwilym back to our meeting, I understand you and your family have had a very difficult time with Covid.

“It’s great to see you on the mend and back with us today.”