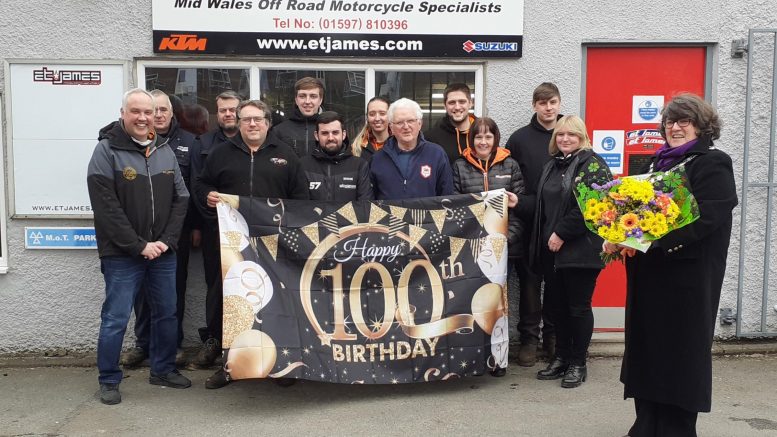 Rhayader family-run business ET James started out life selling soft drinks in the late 19th century, and has proved it still has plenty of fizz more than 100 years later.

Ernie Thomas James diversified into motorbikes and cycles in 1921 after his grandfather, who built the original shop, set up the Davies & James soft drinks business in 1890.

In the 100 years since, ET James has become synonymous with Mid Wales and motocross, with the brand well established throughout the UK.

Ernie’s son Selwyn joined his father in 1956 and, despite turning 80 in February, is still heavily involved in the business 65 years later – in fact his own son Andrew believes everyone else is struggling to keep up with him.

“He’s still very much the boss,” Andrew said of his dad.

“It’s all he’s ever known. He’s here seven days a week. I joke with my son Adam that we are the ones who can’t keep up with him. He’ll be here from 7.30 in the morning to 8.30 at night, then he’ll still be here at the weekends when we close a bit earlier.

“The only two days we’re closed a year is Christmas Day and New Year’s Day and even then dad will be off out for a walk somewhere once he’s had his Christmas dinner.”

ET James roared into business in the early 20s, selling, servicing and repairing motorcycles and cycles, plus acting as dealerships for Royal Enfield, Matchless, New Hudson and Raleigh motorbikes cycles up to the outbreak of World War II, after which they became a dealer for DMW motorcycles.

Selwyn joined his dad when he left school in 1956 and from 1964 they started selling Suzuki bikes, when the giant Japanese firm first came to the UK.

After Ernie died in 1974, Selwyn was joined by brother Guthrie and the siblings expanded in 1976 by purchasing another premises (Fairfield Filling Station) where Guthrie set up the car servicing side of things.

Two years later they bought another premises, Sycamore Garage, which has been the home of the motorcycle side of the firm since.

Over the years ET James have remained Suzuki dealers and have also sold Yamaha, Honda and Kawasaki bikes too. They currently sell KTM, Suzuki, Gas Gas and new for 2021, are also Sherco dealers; specialising as always in off-road bikes – including enduro, motocross and now trials bikes too.

Guthrie sadly passed away earlier this year but Selwyn remains an intrinsic part of life at ET James and the company remains as much of a family affair as ever – with Selwyn now joined by a total of eight members of the James gang.

“Who knows, hopefully in another 100 years it will still be in the James family,” said Andrew, who came aboard when he left school 35 years ago.

“I left school in 1985 and have been here ever since. My son Adam works in the workshop, I’ve got twin sisters who both work here; Jillian is on accounts and Sharon helps out in the shop from time to time. Their kids also help out.

“My brother David runs the Fairfield garage, while his two sons Thomas and Cameron are mechanics, even Cameron’s girlfriend Sophie is employed here.

“John Evans is our main mechanic and he’s been here since school and is like family, we’ve got Joanne Addison in the shop and Kate Tucker also in accounts.”

Even though many businesses have struggled during lockdown, the rurality of Powys has actually aided ET James as they’ve been kept busy by local farmers.

Andrew added: “It’s been a tough old year with lockdown, there’s been no events on so people are not buying as normal.

“But we’ve been selling via mail order so we’ve done alright, we’ve kept busy with servicing farm quads too and we’ve got two fuel stations as well, so we’ve survived.

“I thought it would have been worse but hopefully now things will pick up.”

Andrew also helped establish the hugely popular Cwmythig Hill motocross series that takes place in nearby St Harmon, which attracts riders from across the UK and further afield, while a thriving Rhayader Motor Club and its membership is also key to the business.