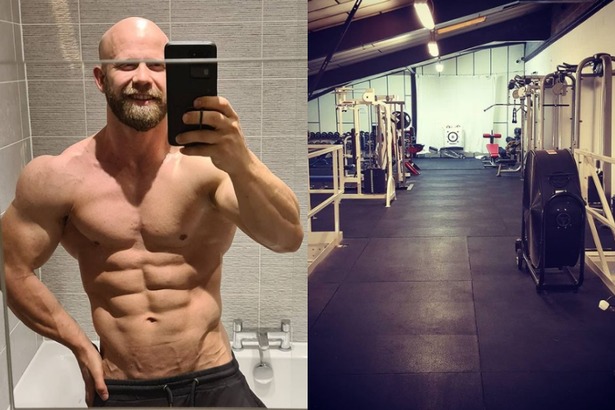 GYM owner Nick Newton knew the risks of flouting Wales’ strict coronavirus lockdown rules – and insists he broke them anyway, for the benefit of his clients’ mental health.

Nick didn’t get a lump of coal in his Christmas stocking but instead received an unwanted gift of a very different kind when Powys County Council shut his Llandrindod Wells gym down on Christmas Eve for breaking Wales’ stringent festive lockdown rules.

The 41-year-old – who owns Nick’s Gym on the town’s Ddole Road Enterprise Park – was fined £1,000, but believes the fact that has already been paid off by generous supporters shows he was not wrong to stay open.

Even though there is perhaps more uncertainty and fear surrounding the future over coronavirus than ever right now as confusion reigns and cases skyrocket, Nick vehemently denies he ignored the rules for personal gain. Instead, he is adamant it is because he fears for the mental health of gym-goers.

“After the last lockdown I said to members I was going to stay open if it happened again so I felt like I couldn’t go back on that,” said Nick.

“My members talk to me, I’m close with a lot of them so I know what they’ve been going through in terms of their mental health, and I have my own issues too. I felt it was important to stand up for what I believe in and then stand by that. I knew the risk and I don’t regret it. I can’t regret trying to help people.

“It’s not about the money, that’s not why I opened up a gym. I want people to become the best version of themselves.

“And it’s not sticking a big middle finger up to the establishment – it’s about caring for my members. I’m affected by their stories and I wanted to give them something to look forward to.”

A third lockdown scheduled to come into force across Wales on December 28 was brought forward to December 20 following a rapid rise of cases across the UK, and Wales specifically, with the country entering the highest Tier 4 alert level.

All non-essential businesses were ordered to close and the planned five-day relaxation of Covid rules for Christmas was cut to just Christmas Day for the whole of Wales. There is no sign currently when these latest restrictions will be lifted or relaxed.

Nick set up a gofundme page following his visit from the council and the £1,000 fine was paid off by generous supporters in a matter of days.

Besides the support he’s also received his fair share of criticism too, but he is adamant he hasn’t acted selfishly or recklessly.

“They have their beliefs and a different viewpoint to me and that’s fine,” he said of his detractors.

“But they just assume I’m irresponsible and selfish whereas I simply think I’m doing the right thing. I’m not naïve, I just don’t believe the government.

“Research suggests lockdown doesn’t work, but this advice is ignored. For gyms, figures show there are only 0.34 transmissions per 100,000 people, among the lowest.”

Industry body ukactive published the above figures in September, with gyms and leisure facilities in England seeing more than 22 million visitors through the doors since reopening – and just 78 confirmed cases of Covid-19 among customers, dispelling the belief that they act as ‘super spreaders’.

“I’ve had huge amounts of support from members who appreciate what I’ve done for them,” added Nick.

“People will point the finger at me and say I’m contributing to deaths but for a few people I might have saved their lives because the mental health aspect of this pandemic is serious. It’s affected me, my dad died during Covid.

“Suicide rates are going up and it’s a tougher time now because of the dark winter nights and people haven’t been able to see their loved ones like they normally would. I know how hard it is, as I’ve been in a similar position. If the pandemic had occurred 18 months ago I don’t think I’d have come out of it alive.”

Despite standing firm initially, Nick now admits he will not continue to ignore the rules due to the increased financial consequences that come with repeated breaches, and he says he will be shut for the foreseeable future – warning that his business might go under.

“I did have a £20,000 loan to stay open earlier in the year but that’s gone, and the grants we got didn’t even scratch the surface to be honest.”