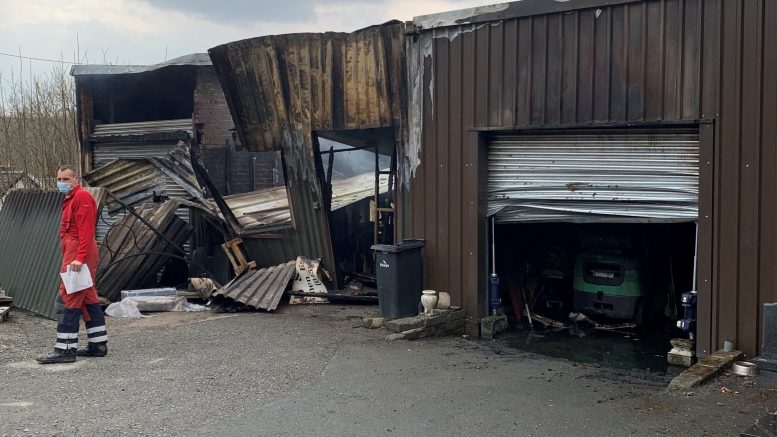 IT IS FEARED thousands of pounds of damage has been caused after a fire engulfed a family-run business that has stood in a Radnorshire town for more than 130 years.

The alarm was raised at Ben Lloyd & Son, a monumental masonry, in Rhayader shortly before 10am on Tuesday (April 20) when a fire suddenly and mysteriously broke out in the warehouse – destroying expensive equipment such as a forklift, quad bike, sandblaster, compressors, and wiped out the business’s newly-installed computer system.

Police evacuated everyone from the Bridge Street property, as well as the surrounding area, and closed the road, preventing access to the nearby Elan Valley, before fire crews arrived to tackle the blaze, which ripped through the premises with alarming speed.

Jim Lloyd has run the family firm for almost half a century, having been opened on the same site by his grandfather in 1886.

“I went in to get the fire extinguisher and then it started dropping off the ceiling and it got on me,” said a shocked Jim, still wearing his fire-damaged gilet, as fire crews remained on scene and an investigation got under way.

“We don’t know what caused it. I came down about 9am and made a few phonecalls, then I went up the Valley to see my builder who’s doing a bit of work for me. So, I went and saw him, I was only there 10 minutes, and when I came back the flames were coming out the front door. There was nothing there at 9am.

A charred quad bike sat in the yard as the warehouse continued to smoulder at around 1.45pm, with the framework all contorted and blackened by the blaze. And Jim estimates the fire has caused thousands of pounds worth of damage.

“We’re very busy at the moment and I’ve got a lot of orders on,” he added.

“Only yesterday I filled the workshop up with orders to work on, we’d just had a delivery. There was a lot of equipment inside; a forklift, quad bike, a big polisher, sandblaster, compressors, it’s all gone, we weren’t able to save anything. We had a new plotter and computer system last year, that cost £6,000. I cannot grasp what happened.”

Wyn Lloyd, who often helps out at the business, has been coming down to see cousin Jim every morning for a cup of tea for the last two decades, but had never been greeted by what he saw on Tuesday.

“I came down for a cup of tea and came round the corner and the fire was roaring,” he said.

“There was nothing more we could do when we got here. Not a damn thing. It was terrifying. Even if you’d had a sprinkler system in there it wouldn’t have touched this beast.

“It’s a complete mystery. The central heating wasn’t on because it was warm, the woodburner wasn’t on.”

West Street in Rhayader was also closed at Church Road due to the incident with reports of “lots of smoke” being seen in the area and a police cordon was set up.

“Dyfed Powys Police was called just after 10.20am this morning, Tuesday, April 20, to a report of a fire at a business premises in Bridge street, Rhayader,” the force said in a statement.

“The property and surrounding area have been evacuated. A cordon has been put in place and the road closed to traffic and pedestrians for the safety of the public.

“The public is asked to avoid the area while the incident is being dealt with.”

A spokesman for Mid and West Wales Fire and Rescue confirmed that three bowsers were used to tackle the fire. One engine remained on the scene and a fire investigator had also arrived. The road was back open just before 2pm.

“West Street Rhayader at Church Road closed due to fire further down at or over the bridge, lots of smoke so may be a while. No access to Elan Valley,” said Pete Roberts, a Llandrindod Wells county councillor who lives in Rhayader, posting on the Mid Powys Community Travel Alerts Facebook page.