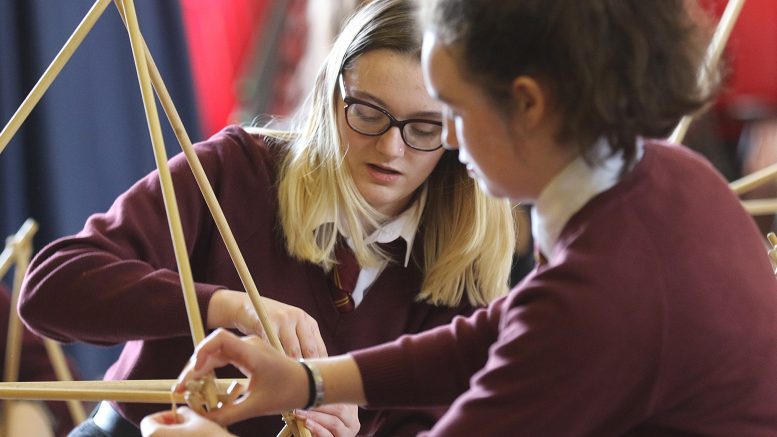 PUPILS and parents have been left stunned by a decision to revoke a policy that allowed free school transport between Rhayader and Llanidloes for nearly half a century.

Since Rhayader Secondary School closed its doors in 1972, pupils from the Radnorshire town have been afforded free transportation to Llanidloes High School.

However, despite the goodwill policy lasting 49 years, parents were shocked to learn when applying for free transport for the 2021/22 school year which begins in September that, suddenly, Powys County Council (PCC) had revoked the privilege.

Parents are furious and say the decision was made without informing them, and despite the fact the council were still encouraging Rhayader parents to apply for places at Llanidloes for their children. Parents and Rhayader’s county councillor say the decision makes a mockery of the council’s desire to reduce its carbon footprint, as it will lead to more traffic on the road as parents have to drive their children to the school – a 30-mile round trip. Even more baffling is that Rhayader children attending the Welsh medium stream in Llanidloes remain entitled to free school transport, but not those taught in English.

“The whole thing is a mess, it makes no sense whatsoever,” said Alison Colbridge, a parent whose son Iain is already a Year 10 pupil at Llanidloes, while daughter Isla will be heading to high school in September.

“I applied for my daughter to go to Llanidloes High School and she was accepted, then we had an email back a week later informing us there was no transport available. Why were we invited to apply for a place then?

“Even worse, pupils from Rhayader who attend the Welsh stream can still get free transport, just not English medium kids.

“It is going to force some parents to change where their children attend, so in fact there is no choice of secondary education at all.

“We just don’t know anything, we’re in the dark and at the mercy of Powys County Council. There has been no explanation. The high school didn’t know, neither did the primary school in Rhayader.”

According to the council’s website, to qualify for secondary school transport in Powys, a child must live three or more miles from the nearest school, measured by the shortest walking distance. Transport is normally only provided to the school that normally takes pupils from the area where they live but since Rhayader’s secondary school closed in the 1970s, pupils from the town have routinely either attended Llanidloes or Llandrindod High School – now Ysgol Calon Cymru.

Alison says she will be forced to work around the issue if the council doesn’t reverse the move, but while she insists she’ll be able to cope, she worries for other parents who simply won’t be able to get their kids to school.

She said: “I’ll be able to get my child to school, I can work around it. But I know one parent who doesn’t drive and some who have to be in work by 9am.”

The baffling decision could also result in possibly 30 cars following the school bus from Rhayader up and down the A470, making the 20-minute, 15-mile journey twice a day on the school run in the morning and later in the day – meaning a round trip of 40 minutes and 30 miles.

It is intended for Rhayader to be added to Llanidloes High’s list of catchment schools for the following academic year in 2022/23, which only adds to the confusion.

“So, for the first year, possibly up to 30 cars will follow a bus with empty seats twice a day to and from Llanidloes,” added Alison.

“I know we would car share for example but this could be the reality. Reducing the carbon footprint is a big thing for Powys County Council and this will lead to more cars on the road, which is crazy.”

The local authority declared a climate change emergency last July and has been working for a number of years to reduce its carbon footprint.

It received the Eunomia Recycling Carbon Index trophy in 2018 for the second year running after topping the carbon index league for achieving a carbon saving for 118kg per person in 2016/17.

Rhayader County Councillor Kelvyn Curry has echoed Alison’s concerns and is pleading with PCC to reconsider.

“I urge the council to reconsider this decision because it is really making a lot of upset, uncertainty and considerable ill will for very little gain,” he said.

“Rhayader pupils have had the option to go to Llanidloes High School ever since Rhayader Secondary School closed in 1972, and there has been no consultation with parents or the schools regarding changing this situation.

“It was certainly not made clear when the policy was approved last year that a result would be that pupils from Rhayader would no longer receive transport to Llanidloes. Furthermore, I understand from the head teacher at Llanidloes that from September 2022 Rhayader will be added to their list of catchment schools, so all pupils will be entitled to transport from then.

“It therefore seems sensible and humane, especially for families who already have a child attending Llanidloes, to continue the present arrangement for a further year until the new agreement kicks in, especially as the bus will be going from Rhayader to Llanidloes anyway with vacant seats.

“Pupils in Powys have already had a terrible year – stability should be the protocol right now.”

A spokesperson for Powys County Council said: “Last year, a review of the home to school transport policy was carried out following the approval of the council’s Strategy for Transforming Education in Powys 2020-2030.

“Following the review, a revised home to school policy was drawn up to reduce ambiguity in order to ensure that the policy can be applied consistently.

“The revised policy was subject to public consultation. The consultation findings and the final version of the policy was considered and approved by cabinet in September 2020.

“The latest policy applies to those learners entering primary or secondary school from September 2021 regardless of any siblings who may already be in school.”

Regarding the disparity between Welsh learners being able to take the bus from Rhayader to Llanidloes, but not English medium learners, the spokesperson added: “Welsh high school-aged learners living in Rhayader go to either the Builth campus of Ysgol Calon Cymru or the Welsh stream at Llanidloes High School and are currently entitled to free school transport.”