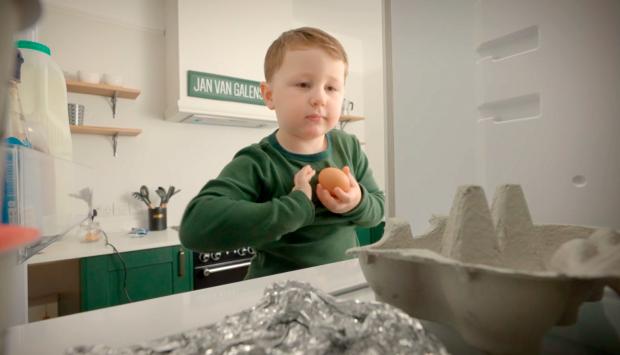 A small Powys shop that shot to worldwide fame last year with its own Christmas advert has launched its newest commercial treat hoping it warms everyone’s hearts after a difficult 2020.

It comes 12 months after the phenomenal success of their 2019 advert that has been watched more than 4 million times on social media and catapulted little Arthur and his dad Tom into the global limelight.

The pair appeared live on national and international television, radio and in print and online at dozens of the world’s biggest newspapers, their £100 commercial hailed by many as better than multi-million-pound efforts from John Lewis and M&S.

Once more, the family-run shop hopes its latest attempt can draw attention alongside the big-budget corporations and go viral.

On this occasion, after a devastating year in which many small UK businesses have been deeply affected by the coronavirus pandemic, Hafod Hardware have changed the focus of their advert to highlight kindness with the slogan ‘Give What You Can’.

“I’m really nervous about the advert this time,” said Tom, 31. “We weren’t planning to do another commercial this year, we originally said ‘no’. But we’ve had so many people asking us to do it again.

“After the year everybody’s had, we felt we didn’t want to let people down.

“As Christmas drew close and with the overwhelming support from our customers near and far, we felt like we should give something back.”

Tom added: “We’ve taken a different approach with this advert. We didn’t want it to be about spending money at Christmas when people are finding it very hard financially.

“We want the advert to be responsible. The overriding message this year is about giving what you can. But we also wanted it to be funny as well.”

It is the fourth year in a row that 125-year-old Hafod Hardware have released a festive advert – all featuring Arthur.

This year’s commercial begins with the youngster jotting his Christmas letter to Santa before grabbing and running off with his mum Laura’s shopping list.

Over the course of the video, excited Arthur locates her wanted items from around their house, causing havoc and confusion for his parents in several hilarious moments.

It ends with the family opening Arthur’s ‘gifts’ with the message ‘Give what you can this Christmas’.

A familiar voice accompanies the video in the shape of American singer-songwriter Andrea von Kampen, with her version of ‘Hard Times Come No More’, a fittingly worded song composed in 1854.

“Arthur really enjoys being the star,” said Tom. “He loved doing it all over again – he’s great fun to work with.

“I wanted Laura to have a prominent role this time and she was great. If this is to be our last Christmas commercial we film, I want her and the family to be a big part of it.”

Tom added: “So far, the reaction we’ve had from people has been fantastic. I’d be delighted if we achieve a small fraction of the success we had last year.

“What happened last year was unbelievable. To see how many people viewed the video, and the response we had around the world, was incredible.”