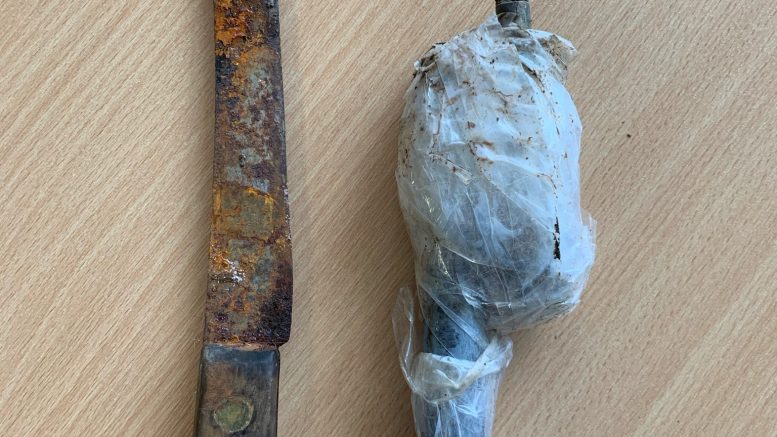 POLICE in Radnorshire are still reaping the benefits of a week-long operation aimed at taking knives off the street – after children led officers to these two rather worrying looking weapons.

The one rather old and other modified weapon were seized by Dyfed Powys Police officers in Llandrindod Wells over the weekend after being alerted to them by two local children.

Radnorshire Police tweeted on Sunday afternoon, May 16: “Op Sceptre may be over but you can still surrender knives at your local police station.

“Thank you to the two young children who saw these and told the officers who were on patrol in the area, great job. #stopknifecrime.”

The force took a number of potential weapons off the street after announcing they have had a quantity of knives handed in as part of an amnesty week.

Operation Sceptre ran from April 26 to May 2, whereby people living in Powys, as well as Carmarthenshire, Ceredigion, and Pembrokeshire, were encouraged to leave unwanted knives in amnesty bins at designated police stations.

And the force revealed a number of blades had been handed in at Llandrindod Wells Police Station or to Radnorshire-based officers during the week-long operation.

“The damage caused by knives, not just to the victim and their families, but also to the wider community, can be devastating. We will be doing all we can to keep knives out of the wrong hands.”

For information on the laws around knife crime, and when it is legal to carry a knife, visit the Dyfed Powys Police website at https://www.dyfed-powys.police.uk/news/dyfed-powys/news/2021/april-2021/op-sceptre-how-to-get-rid-of-an-old-knife/.