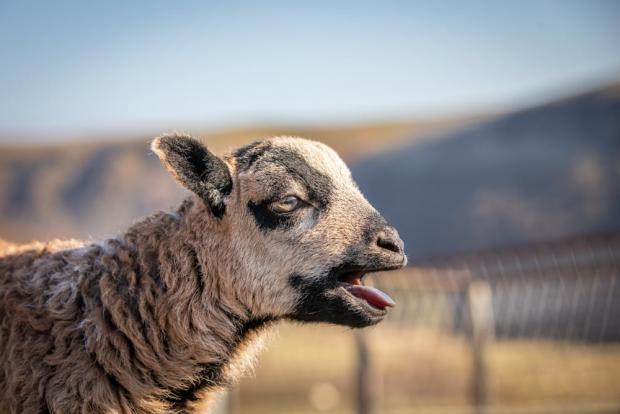 There no denying it spring has arrived and its getting increasingly busy on our Elan Valley hill farm, writes Sorcha Lewis.

As the April days roll by the landscape is filling up with the sounds of lambs bleating and male birds trying to out compete each other to win over the girl.

The barn owl sits at night on the oak tree hissing at us irritably as we go to and fro seeing to the sheep well into the night.

As an upland hill farm our sheep are the very hardy Welsh Mountain breed, most of the flock is the “Elan Valley type” and have been on the uplands here since the times of the Cistertian monk.

We have a small flock of Badger Faced sheep and some blue telex cross. The hardy mountain sheep are hefted to the hills (born on and stay on the same hill) and usually have a single lamb.

Much time is spent out on the hills checking on sheep this time of year. Problems noted are monitored and sheep needing further looking after are brought closer to home for a little more TLC.

Mostly the weather this April has been good though there were a number of days with artic winds blowing through and a bit of snow did seem to encourage wool, fur and feather to hunker down again for a few days.

We call this a lazy wind; it prefers to go through you rather than around you.

In a nest sheltered from the cold wind within the bales of hay (collected from the hay meadows last summer) a robin sits tight on six eggs and within no time at all six little chicks emerge all with “lockdown” hairstyles.

A ewe with her newborn twins are moved into the barn for a couple of days as they looked so vulnerable caught in a little flurry of snow in the field.

The valley really looks beautiful now as little buds start to emerge along the long thin branches and we were lucky enough to catch a glimpse of a pair of bullfinch feeding on the damson tree buds.

Dippers and grey wagtail are busy along the brooks, Reed bunting, pied wagtail and skylark are around now.

There really isn’t anything to make your heart flutter faster than the sound of a skylarks song as it rises into the sky and falls back down to the ground. It has a real impact on the listener.

The first swallow has been seen (earlier than most years) and the curlew are back to breed, we have a few come that feed on the meadows and they breed on our neighbours farm.

Meadow pipits are in good numbers this year- this is good news for the cuckoo when they arrive and definitely good news for the merlin I watched as he snatched one up from the ground in front of me; It still makes me feel breathless remembering that moment.

This week a number of nest boxes were replaced on the farm and hopefully they will be used for breeding by redstart, pied flycatcher and other summer visiting birds. Fencing and repairs take a bit of a back seat as all attention is on the sheep.

Easter has landed early this year and we have really been feeling the spirit of the time, deep in fluffy lambs, springtime eggs and daffodils.

Orphan lambs are fostered onto mothers that have lost a lamb. One little orphan lamb has become my shadow this week. He is called Malcolm and is a sucky lamb, one of twins. His mother didn’t have enough milk for the two so he has come to the house and settled himself straight in. His favourite place is to sleep in front of the Rayburn and he likes to pull some boxes off the dresser and push them round the kitchen. A rather entertaining little chap.

Feeding sheep this time of year is an important job for a hill shepherd.

Bales of hay or bags of feed are taken up into the hills and even on the coldest of days the smell of summer last can be enjoyed as you shake out the meadow hay for the sheep and cattle.

Not only does feeding give an opportunity to ensure the ewes have energy for new lambs and helps in milk production; but you can see if the ewes and lambs look well.

The seeds that fall from the hay are also welcomed by the small birds that come to the feeding places where the sheep congregate.

Welsh mountain sheep have long fluffy tails which are not docked as they are needed for the cold winters; when the milk is rich it can block up the lamb causing a bung when it dries onto the tail and this can cause them to die (we call it topped up).

It’s not a glamorous job scraping off the hardened poop and it occurs more frequently when the weather is dry.

The mothers are super but as always there are times when a shepherd needs to intervene and care for those that are struggling.

All a farmer need to tick them over is a kettle warming on the Rayburn as this is the tonic to get you through those long days when things get tough. We wouldn’t have it any other way.