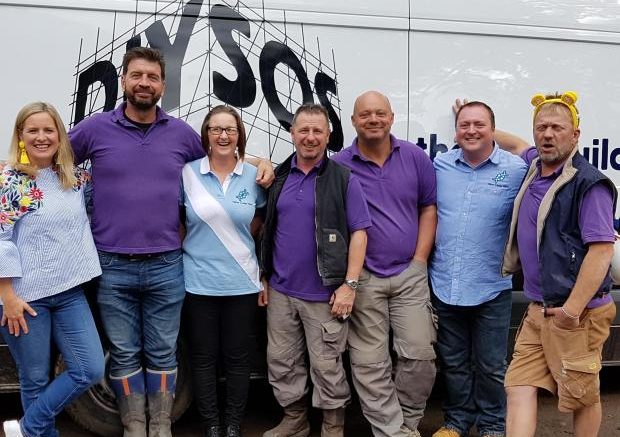 Yes, we know that’s not the title of the actual programme but it might be what contestants on this year’s popular reality TV show are screaming for in order to wash down whatever horrid creepy crawly they’ve had to swallow as part of the infamous bush tucker trials.

And it is Welsh spring water supplied by a Llandrindod Wells-based company that the cast and crew of I’m a Celebrity…Get Me Out of Here! could well be sipping on when the hit show returns to UK screens this weekend.

Due to global travel restrictions enforced as a result of the coronavirus pandemic, this year’s series – the 20th season of I’m a Celebrity – is being filmed in Abergele rather than Australia.

There will be a host of famous faces joining presenters Ant and Dec in the concrete jungle, rather than the usual setting of an actual jungle, at the stunning Gwrych Castle – including multi-gold medal-winning Olympian Sir Mo Farah, actor Shane Richie, TV presenter Vernon Kay and journalist and radio presenter Victoria Derbyshire.

Bunched in among all the celebs and playing a big part behind the scenes will be husband and wife team Sarah and Steve Griffiths – who run Water Cooler Wales in Llandrindod and are supplying the show with contactless water coolers for the duration of filming.

“We’re massive fans of the show, so it’s surreal to now be a part of something so well loved and a programme everyone knows about,” said Sarah, who visited the set last week after getting a call from a production assistant.

Sarah (3rd l) and Steve (2nd r) pictured with Nick Knowles and the DIY SOS crew in Swansea a couple of years ago.

Water Cooler Wales are not complete strangers to the world of showbiz as Sarah and Steve, both 43, have worked alongside film crews previously – including the recent Gavin and Stacey Christmas special, Keeping Faith and DIY SOS as well as other Wales-based shows, but Sarah admits this is different. “We’ve worked with a few film companies over the last few years but I’m a Celeb is the biggest gig we’ve had so far – everyone’s heard of it.”

In the age of Covid-19 of course restrictions and rules are tight and so Sarah and Steve have adapted – the 40 coolers they’re supplying for the show are operated by foot rather than hand, to aid with sanitation concerns.

“We supply the coolers and 90l bottles of Welsh spring water, which is in demand. The water is Hafod Water, from Llandeilo.

“We’ve just started doing contactless coolers as people are concerned about Covid, so the new ones have an adapted foot pedal on the floor with left and right for cold and room temperature water.”

Sarah, who handles the administration side of the business, received a call last Monday from show chiefs and they were delivering the coolers in Abergele, between Colwyn Bay and Rhyl, on the Thursday.

They did fear the contract would fall through due to the ongoing uncertainty surrounding the pandemic – Wales only emerged from a 17-day ‘firebreak’ lockdown on Monday – but the show is going ahead. It gets under way on Sunday at 9pm on ITV – the first time since first airing in 2002 that the show is being filmed outside Australia.

It’s an impressive achievement for a company running with just three employees – Sarah, Steve and the aptly named Tony Wells, their dedicated driver.

Created in 2009, they work with businesses small and large as well as individual customers across Wales and the Borders, installing coolers in their homes, either bottled coolers or mains-fed ones.