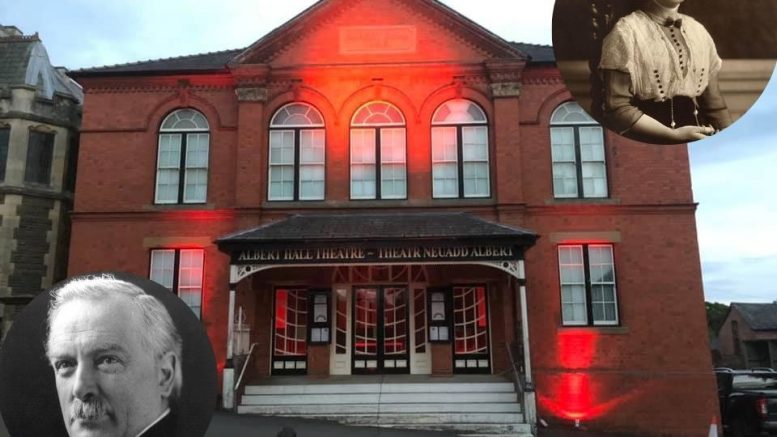 The hall was built in 1896 when local Presbyterians raised £2,000 for its construction.

The town was enjoying a boom in tourism as Victorians flocked to Llandrindod to enjoy its spas and healing waters.

Such had been the influx the town’s Presbyterian chapel could no longer cope with the additional demand so the Albert Hall was constructed to host Welsh services during the summer months when the population of the town mushroomed.

The hall was designed by Owen Morris Roberts and Son of Porthmadog with a capacity for 750 people and named by Edward Jenkins, a member of the church.

When the adjoining chapel was rebuilt in 1905, the Albert Hall’s basement was converted into a chapel schoolroom and the pulpit of the 1870 chapel was moved to the hall.

The hall was used for entertaining 4,000 men billeted to the Royal Army Medical Corps during World War One who were based in the town

The stationed soldiers became part of town life and regulars at the Albert Hall which hosted the town eisteddfod in 1916 where a recitation prize was awarded to a Manchester soldier who was also a Jewish Rabbi.

In 1922 the Albert Hall became a commercial theatre and welcomed a host of well known names.

As well as David Lloyd George, Anthony Eden and Emily Pankhurst, the theatre also welcomed many stars of the day.

Composer Ivor Novello and comedian Tommy Handley both entertained packed halls during this time though in 1929 the Albert Hall ceased to operate as a cinema as the age of the silent film came to an end and made way for ‘Talkies’.

In 1939, Llandrindod became a training base for thousands of troops.

With lectures in the day and entertainment every evening, the Albert Hall was in full use once more. Many of the troops who graced the stage became household names.

However following the end of World War Two audiences began to dwindle.

The church continued to hold Welsh services in the Albert Hall until 1951 and seven years later the theatre was converted into the Campbell and Edwards auction house.

In 1962 townspeople purchased the building and began working toward making it a theatre once again.

However with the Spa holiday era now over the days of packed houses were over and locals were left to fundraise to restore the building to former glory.

With help from the Welsh Arts Council, the committee drew up a programme of improvements and the Friends of the Albert Hall led the restoration throughout the 1970s.

In 1981, the Albert Hall was Grade II Listed, in order for the building to be preserved and protected.

In 2007 a £115,000 restoration project began, supported by the Heritage Lottery Fund and European Union.

Since then, the theatre has undergone further improvement.

Throughout the theatre continued to welcome stars of the stage who would go onto become household names.