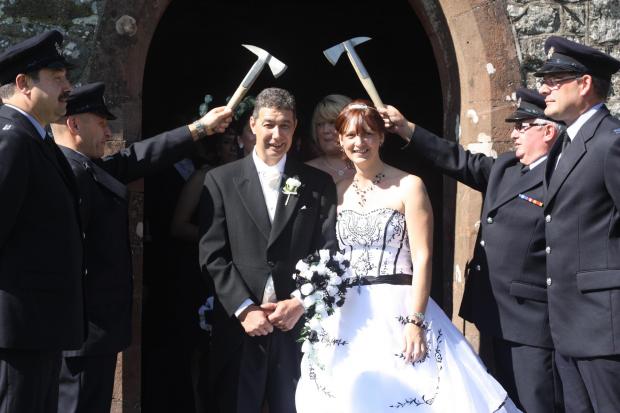 HUSBAND and wife firefighters Mike and Kerry Davies have had enough of rescuing cats from trees and hung up their hoses at Llandrindod Wells Fire Station after nearly a quarter of a century’s combined service.

The couple were congratulated and recognised at the start of the month after taking the decision to call time on their admirable service, so they can concentrate on spending time with their family.

Mike, 57 this Saturday, has been a firefighter for two decades, having joined the service in February 2000. Kerry, 45, came on board three-and-a-half years ago.

The Llandrindod couple have been together for 14 years, married eight, and are looking forward to their retirement – from the service, if not their normal day jobs.

“It just felt like, after 20 years, it was time to get my life back,” said Mike, who works as a delivery driver for builders’ merchants Jewson in Llanelwedd, Builth Wells.

“We were both on a 100 per cent contracted schedule so 120 hours per week, a lot of it on-call, and combining that with a normal work week.”

Kerry, who works as a supervisor at the Burger Manufacturing Co, also in Llanelwedd, added: “It just felt the right time to do it as we have family who have recently moved away to Manchester with the grandkids. The decision was essentially down to wanting to have the time to go and see them.”

Of her first shift in January 2017, she added: “I remember I pulled an all-nighter then went straight into work at the factory the next morning.”

Mike and Kerry are the first husband and wife team at Llandrindod and Kerry’s departure sadly means now there are no female firefighters left at the station. That lack of female presence was something she admits held her back from maybe joining earlier.

The couple on their wedding day.

“I had always wanted to be a firefighter but never had the confidence,” she said.

“I felt like maybe I wouldn’t fit in but, during my training when I first joined, I worked on my confidence.”

Mike said there had been four women on shift during his time, going on to reflect on how the job has changed a lot in 20 years.

“It’s changed so much. When I first came on it felt like there were so many fires, and massive ones,” he said. “Now it’s more road traffic accidents or aerial rescues, special service, we have a dedicated wading team, there’s a lot less fires, because when you go to people’s properties the smoke detector has done its job.”

For Kerry, the new aspects of the role are what she enjoyed most, admitting: “I really enjoyed the first aid side of things. I liked that the role had changed a lot.”

Even though firefighters get teased for rescuing cats up trees, Mike recalls there only ever being about four incidents of being called out to find forlorn felines over his 20 years – and remembers his worst call came when a father and five of his children died in a house fire in Llangammarch Wells in October 2017.

As for the lighter side of the job, the couple said that there almost came a time when they had to fight fires at both work and home.

“We went off to one call together and I only realised once we were in the engine that I’d left my baked beans on the stove,” recalls Kerry.

“We came back and they looked a bit charcoaled but it could have been worse. Two firefighters almost had a callout to their own home.”