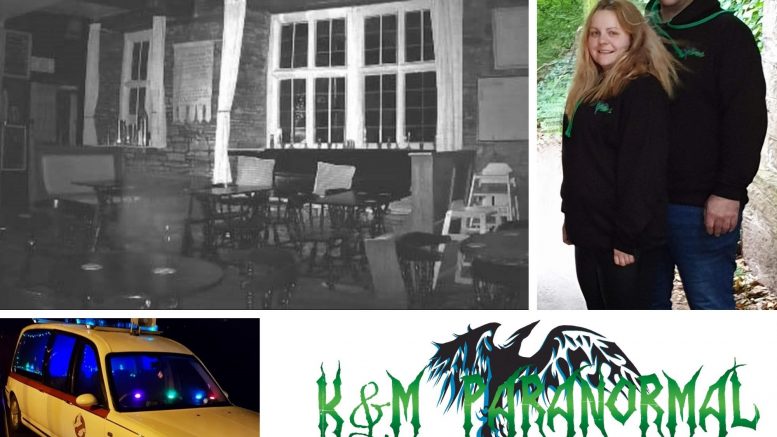 FOR some people it’s the gym. Others like to immerse themselves in a good book. Or maybe walking in the picturesque Powys countryside is your thing. For one local couple, however, exploring the paranormal is their obsession.

Unexplained phenomena and the afterlife may seem like an odd hobby to some, compared to more traditional pastimes such as playing sport, crafting or stamp collecting, but it’s one that brought Katy Craddock and Matt Davies together a little over two years ago.

The duo were so interested in their hobby, they decided to turn it into a business last year. The K&M Paranormal website isn’t as trippy as you might imagine and there’s no portal to another dimension, or the dark web. They describe themselves as ‘a small team of investigators that have a passion for the paranormal and strive to gather evidence that proves the existence of life after death’.

They don’t wear tin foil hats or live in a motorhome like the famous Lone Gunmen that befriended FBI agents Fox Mulder and Dana Scully in cult TV series, the X-Files.

Both Katy and Matt have pretty normal, legitimate reasons for their passion about the paranormal.

“I lost my mum seven years ago and my dad 11 years ago in April, so I wanted proof that one day I was going to see them again. That’s what kicked off my interest,” admits Matt, 34.

“It’s nothing that specific for me,” said Katy, 35. “I’ve just always had an interest in it, it’s always been my thing.

“I loved X-Files and Buffy the Vampire Slayer, shows like that, as a kid. I got the chance to go to this event Matt was also at and then it went from there.

“There was some activity that night and it’s just got more interesting. We both really liked going out investigating so thought why not to turn it into making our own little team. We roped a friend in, and her wife, and that’s how it started.”

That first encounter between the couple was back in January 2019, at an event held at the Usk Hotel, in Talybont. Since then the couple have dived into the weird world of their hobby a little further. Although, the spirit world certainly didn’t give them a heads up that trying to start up a side business when the normal world was on the brink of a global pandemic wasn’t the greatest idea.

“We did our first public event in March last year in Hereford then lockdown hit,” bemoaned Katy.

“So, for the rest of the year all our public events got cancelled. We only started in March but we had about 12-13 events lined up.

“In between lockdowns and restrictions being eased we did manage to do some small, team-only events. In October we did a small public event in the Skirrid Inn (a pub in Katy’s native Abergavenny) and we’re hoping this year, going forward, that we can host more events.

“We’ve got 14 dates planned at the Skirrid and elsewhere in the UK that got postponed, we’re just waiting for venues to open back up. It just depends on getting the go ahead.”

Matt and Katy now live in Crickhowell, with both working at pharmaceutical firm PCI Pharma Services – even if their interests are more connected to CSI.

Enjoying what they do, Katy and Matt are met with plenty of scepticism – it’s a huge part of the paranormal – but they take that all in their stride. Matt even admits he is sceptical by nature, despite his passion.

“You should only go to paranormal if it can’t be explained naturally,” said the Llandrindod Wells native.

“We both really enjoy exploring the paranormal, as daft as it sounds,” adds Katy.

“Some people like walking or football. This is what we enjoy.”

Matt thinks it’s also associated with technological advances. “The growth in technology has helped, there’s more evidence to suggest there is something there,” he adds.

“There’s better cameras now, without lens flare. As technology gets better, there are anomalies in photos that are harder and harder to explain.

“On the flip side it’s also easier for people to fake things. When I post things, I’ll post the raw footage on YouTube so it’s not altered. We don’t say ‘oh we’ve caught a ghost’, we leave it up to other people to tell us what they think.

“I’d love to capture proof on film. I’m on the hunt for the genuine article.”

As lockdown restrictions ease steadily over the coming weeks and months across the UK, the team – completed by Naomi and Donna – will be hoping to get back out to do some ghost busting. And what better way to do that by travelling in style – an Ecto 1, the car made famous by the 1980s film franchise phenomenon Ghostbusters, starring Bill Murray and Dan Aykroyd.

Like Katy, Matt’s interest in ghosts and the paranormal also stems from childhood. He was, and remains, a massive Ghostbusters fan, which played a part in them revamping an old Rover 75 hearse to look like the famous ghoul-getting vehicle.

Matt completes the look with the same flight suits made famous by foursome Peter Venkman, Ray Stantz, Egon Spengler and Winston Zeddemore – he even has a proton pack.

“We had an event in Llandrindod with the blue lights and megaphone. And we’ve been invited to Llandrindod Carnival this year, if it goes ahead.

“People will always be sceptical or think what we do is a load of rubbish and say they don’t believe in ghosts. We’ve heard it said before ‘oh, the Ghostbusters have turned up’, so why not turn up in the Ghostbusters car.”

Matt’s even used it to chase less elusive items, like his weekly shopping, adding: “I’ve taken it shopping or picked up my son to go somewhere and when I’ve come out the shop someone’s taking a picture of it.

“We take what we do seriously but we have a lot of fun with it. We’ve found that the more happy energy we build up, the more stuff seems to happen. Spirits and ghosts are people and most people have a sense of humour.”

When lockdown hit they thought about selling the Ecto 1 but now hope to raise funds by perhaps using it as part of a charity event – travelling from Lands End to John O’Groats and hopefully partnering with a children’s or animal charity.

With Covid-19 restrictions easing in Wales and the UK and with increasingly dwindling infection rates thanks to availability of the vaccine, the team will now look forward to getting back on the road and doing what they love. After all, as all X-Files fans know, the truth is out there.