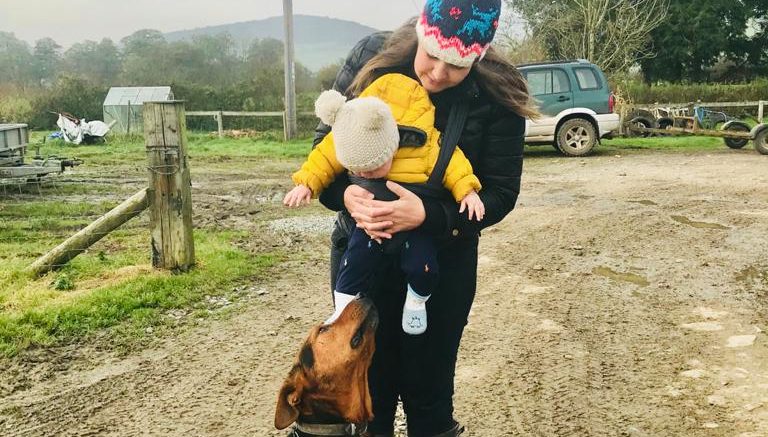 CLARE Evans Jones, has shared her experience of becoming a new mum during lockdown.

Clare, who is originally from Rhayader and now lives in Painscastle with husband Huw and 9-month-old son William, said that keeping in touch with friends and family had been particularly important for her as a new parent at home on the farm.

“William was born last May, during the first national lockdown, and while I’ve absolutely loved the whole experience of becoming a mum, it has been a challenge as we’ve had to adjust,” said Clare.

“It’s been particularly hard not being able to share important moments and milestones with friends and family. My mum and dad weren’t able to see William in the flesh for weeks after he was born and even then, we had to be so careful with social distancing. I’ve been able to show him off to the wider family over video calls but it hasn’t really been the same as seeing people face-to-face.”

Clare underlined the important role of online video calls over the past 12 months.

She said: “I obviously haven’t been able to get out to any baby classes and meet other mums so keeping in touch with friends over Zoom and WhatsApp has been a real lifesaver. We’ve had lots of online village quiz nights and even did a neighbourhood playlist on New Year’s Eve, which was a great way to feel connected.”

Former mayor of Rhayader, Clare, who has continued to run her estate and letting agency, Clare Evans & Co, from home throughout the pandemic, said that one connection in particular had helped her to stay positive and keep her spirits up.

Some 25 years ago, Clare spent a year living in France as part of her degree from Reading University. She met a group of friends there who have all stayed in touch over the years but never more so than during the pandemic.

“Back in 1995, I spent a year teaching English to college students in Limoges and met some incredible friends from different parts of the UK who were all doing the same thing in different schools. We have stayed in touch over the years but as we have all had families and moved to different parts of the world, it has been harder to stay in touch.” said Clare.

“This year, however, with everyone stuck at home with very few plans, we have taken the opportunity to have regular video calls to check in on each other and share lots of laughs and memories. While one of the group is only down the road in Hereford, another in Cardiff and one in Devon, the others are much further afield now, living in Australia and New Zealand, so finding a suitable time to call with the time difference has been a bit tricky.

“It’s been so lovely to reconnect with those who are further away after all this time. It really has helped me through lockdown, particularly as most of them have had children some years ago and can share their parenting tips with me.”