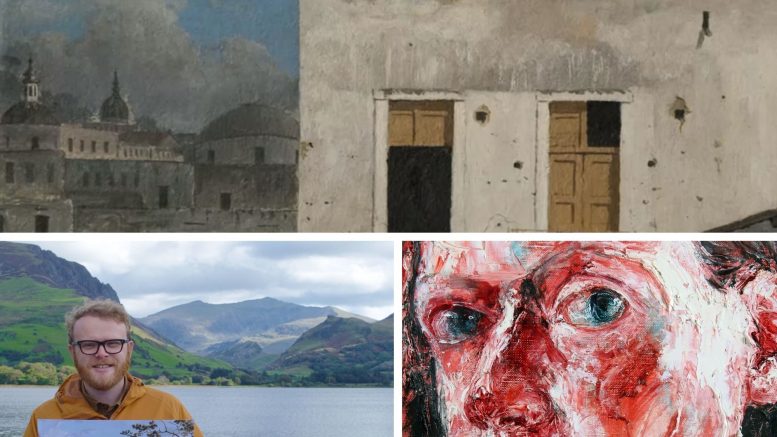 The Story of Welsh Art starts on BBC Two Wales and BBC Four at 9pm tonight, with BBC Radio 6 Music and former Radio 1 Presenter Huw Stephens embarking on an epic journey of discovery of Welsh art. From prehistoric to present day, Stephens will present the story of the art of Wales as part of St David’s Day celebrations.

But it is the second episode next week that will excite Mid Wales art fans with the area’s most famous names featuring.

Next Monday’s (March 8) episode includes a number of artists from Mid Wales who became some of the best artists of their day from Richard Wilson and Thomas Jones to Shani Rhys James. The work of artists from Powys transformed Welsh art forever from ground-breaking landscape art to mesmerising portraitures.

The most prominent artist was Richard Wilson who was born in Penegoes, just outside Machynlleth. Following his time in Italy, Wilson returned to Britain as one of the most celebrated artists of his generation. With pieces of art such as Caernarfon Castle and Llyn Nantlle, Wilson revolutionised Welsh landscape art. In 1765, he made his way up one of Wales’ highest peaks to create something no artist had ever attempted, a close-up portrait of a mountain, the fabled Cadair Idris. His work revolutionised art not only in Wales but the whole of Britain and many consider him to be the greatest Welsh painter of all time.

Jones, born in modern day Llandrindod Wells in 1742, was also a landscape painter and became a pupil of Wilson. He was best known in his lifetime as a painter of Welsh and Italian landscapes in the style of his master. However, Jones’s reputation grew in the 20th century when more unconventional works by him, not originally intended for exhibition, came to light.

James, meanwhile, is regarded as one of Wales’ most significant living artists. The 68-year-old, who was born in Melbourne, Australia, to a Welsh father and Australian mother. She is based in Llangadfan and was awarded an MBE in 2006.

Stephens said: “I think most viewers will, like me, be amazed at the all the wonderful Welsh art they just don’t know about – there really is so much to discover.

“It’s a rich and fascinating story and it’s been a privilege to tell it on television and bring it to audiences across the UK. I’ve always been interested in art from and about Wales but doing this series has given me some new national heroes.

“We filmed in some spectacular places. So much of Welsh art is about our stunning landscape and I got to stand on the spot where some of the very best artworks have been created – in Snowdonia, Ceredigion, Powys.”