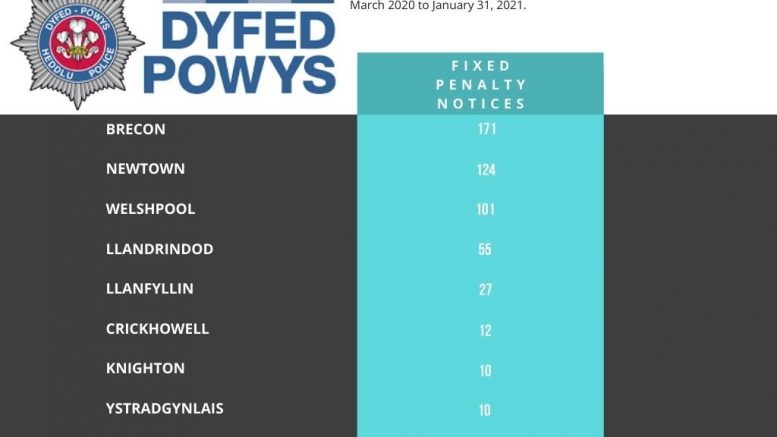 POLICE officers stationed in Newtown and Welshpool lead the way in terms of fines handed out to people who have broken coronavirus restrictions across Montgomeryshire and Radnorshire over the last year.

Officers attached to both towns handed out more than 100 Fixed Penalty Notices (FPNs) to Covid-19 rule breakers between March 2020 and January 31 this year. A freedom of information request put to Dyfed Powys Police by the County Times revealed that police in Brecon have been the busiest in terms of dealing with unruly, unwanted visitors to Powys during various periods of lockdown, as they have handed out 171 fixed penalties – 33 per cent of the entire Powys area. Newtown officers are second, handing out 124 FPNs, while Welshpool police have metered out 101.

The data comes after we reported in January that Dyfed Powys Police dealt the third most fines for Covid-19 violations last year out of Wales and England’s 43 territorial police forces.

A detailed breakdown of the number of fixed penalty notices given by police, including the age and ethnicity of those who had been fined, was published by the National Police Chiefs’ Council (NPCC). Figures revealed that fines handed out by Dyfed Powys Police equated to five per cent of all fines among Welsh and English police forces – which in total amounted to 32,329.

But home secretary Priti Patel revealed that figure had risen to 45,000 since December 20 last year, meaning there has been a sharp increase since coronavirus rules were tightened over Christmas.

While Newtown and Welshpool officers were the busiest in terms of dealing with people flouting the rules – many of whom continue to visit Powys beauty spots like Pen y Fan in the Brecon Beacons, despite persistent warnings from police forces and the Welsh Government to remain at home – Machynlleth and Llanidloes stations were among the quietest in the Powys area. Machynlleth officers dished out only four FPNs while Llanidloes officers served just two.

Officers in Llandrindod Wells dished out 55 fixed penalties, Llanfyllin 27, Crickhowell 12, and Knighton and Ystradgynlais both 10.

Powys stations totalled 516 FPNs, which equates to 29 per cent of the 1,784 handed out across the Dyfed Powys force area – with 63 per cent of Powys’ total emitting from Montgomeryshire and Radnorshire stations.

Ahead of Dyfed Powys in the overall list were Northumbria Police on top, with a whopping 3,034 fines handed out, with Greater Manchester Police second, dishing out 2,183 fines.

The fines handed out by Dyfed Powys Police contributed to nearly half of all fines in Wales – 49.7 per cent of the nation’s total of 3,585.

It is some feat for Dyfed Powys and also shows how much the rules are being ignored in Powys – which has seen a spike in cases since the start of December when lockdown rules were last tightened.

Dyfed Powys officers cover a patch measuring 10,976 square kilometres – it is the biggest area geographically across Wales and England and third biggest in the UK behind Police Scotland and the Police Service of Northern Ireland. The force does this despite having the sixth fewest officers – 1,165 according to March 2020 stats – and one of the lowest budgets too.

NPCC figures state that 80 per cent of all notices issued in England and Wales last year were given to people aged between 18 and 39.