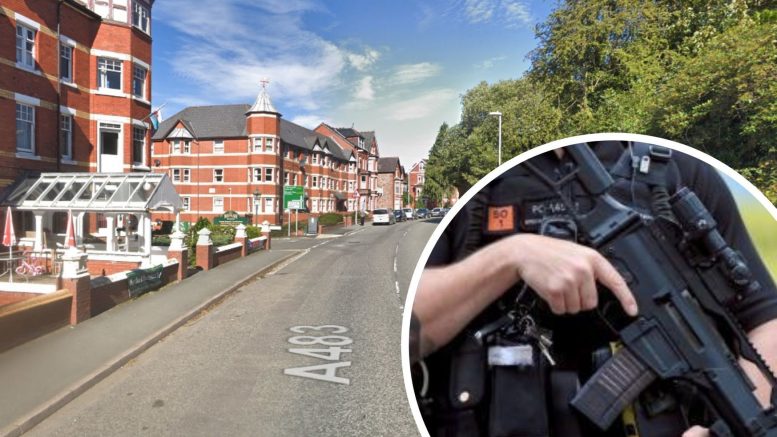 ARMED police descended on a town centre after a motorist spotted a man cycling through the streets with an imitation gun.

The gun that Paul Anthony Smith was carrying as he cycled to a friend’s house turned out to be an air pistol that he had legally bought and used to shoot and kill vermin in a previous job.

The 39-year-old denied pointing the replica Glock self-loading pistol at anyone or waving it around but admitted possessing the imitation firearm when he appeared at Llandrindod Magistrates’ Court on Wednesday, February 24. Smith asked magistrates if the gun would be returned to him but they instead ordered it to be destroyed.

The incident occurred at around 7.45pm on April 19 last year when a motorist spotted a figure dressed all in black, carrying a gun.

“The witness was driving past the Grosvenor chippery and as he drove past Play Radnor he saw someone waving a gun in the air, riding a bike,” said prosecutor Stephen Davies.

“He was dressed all in black, with a black hoodie, black shoes and wearing black gloves. He was holding a gun in the air. The witness turned around to come back and phoned the police.

“He thought the man was aiming the gun at flats above the Montpellier Hotel or Play Radnor, but couldn’t tell if he was pointing it or waving it around. Armed police were on the scene within minutes.”

Mr Davies said that police spotted and observed a man in black in the Alexandra Terrace area and told him to stand still but he ran off into a garden.

Mr Davies added: “He jumped over fences and other police officers were called. At Alexandra Terrace police discovered a pistol and guarded the area.

The gun looked like a real Glock and was seized and sent off for analysis. It was found to be a CO2 powered air pistol, a 25cm-long Glock replica and was confirmed to be an imitation firearm.

“He gave a no comment first interview but the defendant’s DNA was found on the gun and he was re-arrested on December 6 and he said it was his gun,” said Mr Davies.

“He said he had bought it from a gun shop. He used it for work, he cleared barns on farms and used it to shoot rats and vermin, and for target practice.

“On the day in question he’d picked up his work bag from friend’s car, near the job centre. The gun was in a case inside the bag. He placed the gun in his pocket, got on his bike and went onto Temple Street.

“He was going to see a friend and realised the gun was in his back pocket. It was weighing him down so he took it out and put it in his rucksack as he continued to cycle.

“He saw the police and said his friend had cannabis on him so he decided to leave. He ran through some gardens and tried to hide the gun under some foliage, returning about an hour later.

“He said he could understand how the gun could be construed as being waved around as he was passing it from his back pocket to his bag, but he certainly wasn’t waving it around or aiming it anyone or anything.”

A pre-sentence report was ordered and probation officer Donna Davies told magistrates that this was Smith’s third weapons offence, but the other two involved knives and were committed when he was a juvenile. “He denies pointing the weapon or intending to cause fear to anyone,” she said.

Acting for Smith, who is now of no fixed abode and living outside the area, but gave his address as Old Market Meadows, Penybont, Gareth Walters said his client was not waving the gun at anyone but realised he had no reasonable excuse to be carrying it.

“He has entered an early guilty plea here even though he initially made no comment,” Mr Walters said. “He admitted the offence in his second interview. Anyone would have been alarmed had they seen that walking down the street.”

Chair of the bench, Ingrid Gallagher, told Smith: “You need to understand how distressing, worrying and upsetting this was for the witnesses. It was a reckless, frightening and unnecessary act.”

Magistrates ordered Smith to adhere to a 12-month community order, which includes 20 rehabilitation activity days and 100 hours of unpaid work.

He must also pay a £95 surcharge and £85 costs. They also told Smith he could not have his gun back and instead ordered it to be destroyed.