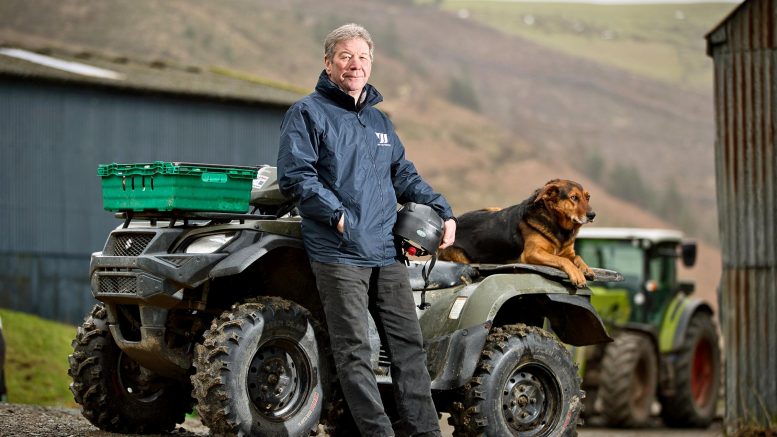 FARM safety expert and instructor Brian Rees, from Abbeycwmhir, near Llandrindod Wells has been awarded one of Welsh agriculture’s most prestigious awards, the Lantra Wales Lifetime Achievement Award.

Described as a true ambassador for farm safety, Brian has spent more than 35 years raising awareness of what is widely acknowledged as a poor safety record within the UK agriculture industry, with many lives and livelihoods lost every year.

“Brian has devoted most of his professional life to this hugely important campaign, over the years providing farm safety training to thousands of farmers throughout the UK,” said Peter Rees, chair of Lantra Wales, who also chaired this year’s judging panel.

“He has also provided leadership within the industry in his role as a past chair of the Wales Farm Safety Partnership, a collaboration between all the leading rural stakeholders in Wales, set up to help improve the safety of farms, forestry and other allied rural businesses.

“Brian’s knowledge and understanding of the subject is second to none and his expertise is regularly sought by event organisers including Farming Connect and Lantra Wales, where for many years he’s worked alongside us at the Royal Welsh Show, the Winter Fair and taken the lead on organising numerous Health and Safety Executive farm safety awareness training days.”

Brian was born into a farming family, leaving school in his teens to work alongside his parents and older brother who reared beef, sheep and pigs at Penbryncenau.

By the age of 17 he was a keen member of Rhayader YFC and Radnorshire county branch, which won a major national farm safety competition three times in the 1970s.

Brian took on the role of team foreman and then team trainer which he credits with triggering his lifelong passion for health and safety.

He was also successful in drama and public speaking competitions and later went on to become NFYFC national chair and represent the UK on the Confederation of European Agriculture.

Brian began his professional farm safety career in the 80s, successfully combining it with full time farming in the early years.

In the 90s, he and his teacher wife Janet, took the decision to sell the livestock and rent out the grassland. It was a decision which was to lead to a lifelong career, a raft of industry qualifications and Brian’s long-term membership of the Institute of Occupational Safety and Health (IOSH).

Fortunately, the couple’s younger son Adam, after attending agricultural college followed by a number of overseas work experience trips, returned home to work and the family farm was again fully stocked, this time with sheep and free-range laying hens, alongside the well-known Saintswell Motorcycle Track and Glastir Woodland Creation Scheme.

Brian is now past retirement age but says he is reluctant to slow down.

“I still get tremendous satisfaction out of delivering a telehandler course to a good group of farm workers and enjoy the farm safety mentoring I do for Farming Connect.

“I can truthfully say that I never expected to be nominated for any award, but I am hugely honoured and very grateful. This will undoubtedly help me raise the profile of the need for everyone working in the industry to make sure they identify risks and take steps to reduce them.

“Even the most cautious and sensible farmers tend to rush tasks and take short cuts when they’re under pressure or time constraints, but training reduces those risks, they get into the habit of planning their work in advance, so that they make better decisions and reduce the risk of accidents.

“Although I’ve no intention of retiring anytime soon, while farmers and training providers still seek my guidance or mentoring, there is an important job to be done and I’m delighted that I can continue to offer practical help and pass on my experience.

“With all training undertaken through Farming Connect automatically uploaded to each individual’s personal online Storfa Sgiliau account, evidence of skills relating to farm safety and the safe handling of machinery and vehicles will provide an important extra notch on many a cv or job application,” said Brian.

For further information on all Farming Connect services, including training and mentoring, visit gov.wales/farmingconnect