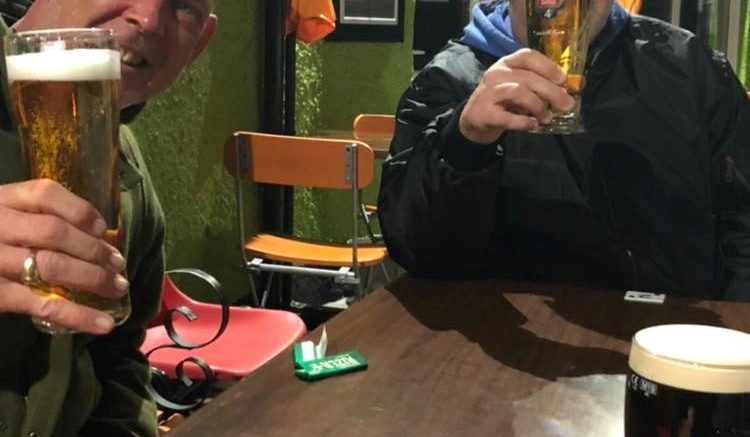 PUNTERS head back to the pub today but we doubt anyone in Wales would have had a pint as early as a couple of Radnorshire regulars – who enjoyed a drink in their local minutes after midnight.

Monday marks an historic day for the hospitality sector in Wales as pubs, cafes and restaurants are allowed to reopen outdoors for the first time in nearly five months.

And a couple of regulars in Rhayader wasted no time at all in beating the queue to the bar as they enjoyed a well-earned pint minutes after pubs reopened on April 26.

Dick Bradley and Garth Freeman each supped a pint of lager at the popular West Street watering hole with landlord Martin McDaid, with the pub posting a picture on their Facebook page at 12.05am with the caption ‘Lockdown is over first pints served’.

Martin, an Irishman, was obviously drinking a pint of Guinness and said opening at midnight was a “symbolic gesture” to herald a huge day for the Welsh hospitality industry.

“We were here cleaning and Garth came up around 11pm asking if I wanted any help and I told him ‘wait here now an hour and you can have a pint’,” said Martin.

“I had everything set up ready for midnight and Dick, who is a neighbour and owns a local guesthouse, joined us.

“It’s an unbelievably historic day,” added Martin, who admits to feeling a mix of nerves and excitement ahead of the big day. He just hopes the authorities give pubs, cafes and restaurants room to recover.

“I was half hoping the police might come by last night as they’ve been around most nights recently,” added Martin.

“The feeling is a mix of excitement and nervousness. We’ve already had the council and police coming to see us and laying down the law, which is a little bit much. They came last Wednesday.

“It’d be nice if they’d come and said something like ‘this is what we’d like you to do’ rather than ‘this is what you’re going to do’. Are they out to close us or support us? We’ve done all they’ve asked of us throughout this.”

After raising a toast to reopening in the wee hours, the pub opened up properly at 10am, and the landlord is expecting a large turnout today.

“We opened today at 10am, we’ve not had our first punter in yet but we’ve got our first table booking at 11am,” he said.

“We’ve got table bookings for between 60-70 this evening and have seating capacity of around 120 in our beer garden. We’re very lucky as we have the beer garden and two doors so we can have a one-way system in place with all social distancing measures observed.”