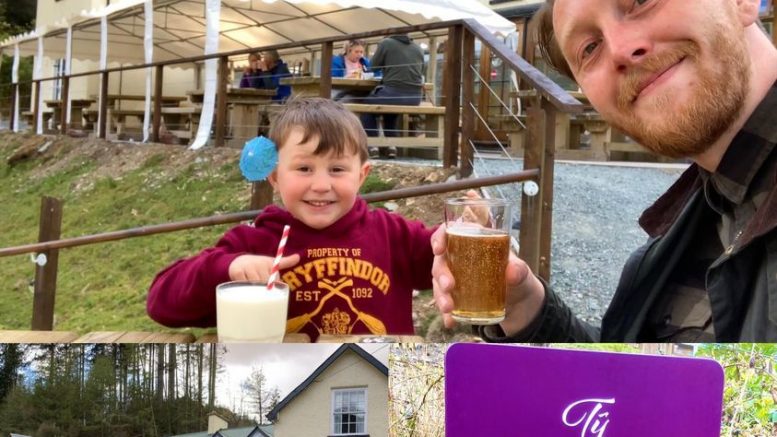 IT HAS been a landmark week for the hospitality sector and one Radnorshire man has gone the extra mile by visiting and promoting all the pubs and cafes that have reopened in his hometown.

Tom Jones (no, not that one!) has been going round the various hospitality businesses that reopened in Rhayader this week, pounding the pavements and then a pint or piece of cake, while promoting the pub or café’s products, opening hours and scenery on his own business’s Facebook page.

Readers will be familiar with Tom and the family’s business, Hafod Hardware, which he helps run alongside his grandparents. The shop has shot to stardom in recent Christmases with their magical and heart-warming festive-themed adverts which has helped put them and Rhayader on the map.

Now, as pubs and cafes welcomed back customers outdoors this week for the first time in nearly five months, Tom has been doing his bit to help out fellow traders.

“I’m trying my best to get round every pub and cafe in my town that have just reopened. I spotlight them and recommend them to visitors now they’re back open,” said Tom, who has been accompanied by his mini me, four-year-old son Arthur, now a local celebrity after starring in the innovative Hafod Hardware Christmas ads.

“It’s gone down really well online and hopefully if they get one more customer from what I’m doing it will have been worth it.

“I set about doing this at the start of the week as I wanted to do something small that might help some of the other local businesses as they start to reopen.”

So far, Tom and Arthur have visited the Elan Hotel, where Tom was one of the first customers to savour a pint as the pub reopened its doors on Monday, April 26. On Tuesday he was at the Lamb & Flag pub, then The Eagles Inn on Wednesday, he and Arthur visited B&B and tea rooms Penbont House on Thursday, and today he stopped off at The Lost Arc café. Tom plans to finish the promotional tour with a stop at the Old Swan Tea Rooms on Saturday.

“We have a nice following on social media so I thought by featuring the pubs and cafes it would help direct a few visitors their way,” added Tom, whose Hafod Hardware Facebook page has more than 9,000 followers.

“It’s had a great reception in town as well as with people holidaying here. We’ve had messages from visitors asking about opening times, whether they need to book or not and if they can take their dogs with them. I’ve tried to answer them all but if I’m unsure I put them in touch with the business owners.

“After chatting with many of the publicans there seems to be a running theme with them that their turnover is very weather dependant at the moment with customers only allowed to eat outside. It doesn’t sound like this will be the case for much longer but it is difficult to manage at the present time.

“I’ve got one more cafe to visit tomorrow and that’s all of Rhayader covered.

“It’s such a beautiful part of the country and I just want to share it with as many people as possible.

“The local economy thrives on tourism and although I appreciate the apprehension that comes with an influx of visitors at the moment, Rhayader wouldn’t have the amenities it has without them. It’s a double-edged sword but if you’re careful how you handle it then we can all enjoy it safely.”

With the Welsh Government announcing that hospitality can reopen fully on May 17, hopefully in the coming weeks the industry in Rhayader and throughout Powys will be pulling in even more punters.