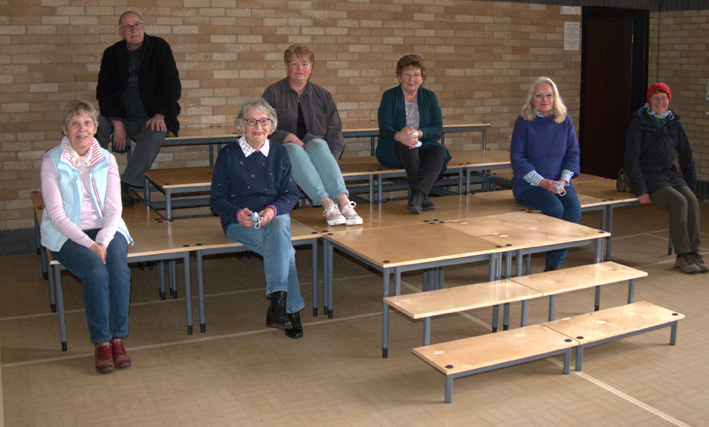 A GENEROUS donation from a local family has allowed members of a Radnorshire village hall to buy a new staging system for the local community.

Members of Penybont & District Community Centre’s management committee recently met with Marilyn Morgan at the village hall to say thank you for the donation.

Marilyn and her husband Richard have been trustees of the Severn Trust for many years, due to the fact they own Penybont Hall which was once the home of the Severn family.

Emily Augusta Severn, who died in 1906, was renowned for her generosity to the poor and to the church. After her death she left bequests to both Llanbadarn Fawr Church and a charity for the poor, with annual sums to be distributed by the owner of the hall and the rector of Llanbadarn Fawr.

Marilyn and Richard, together with the church rector, have been responsible for many local organisations receiving grants to support the good of the community over the years but times have changed and it has been agreed with the Charity Commission that 2021 was an appropriate time to wind up the charity and distribute the remaining capital to benefit local community organisations.

With this in mind, Crossgates Primary School pupils are benefiting from grant aid to support their gardening and tree planting projects and Penybont Village Hall has received a wonderful new staging system to replace the 30-year-old system that had served the hall until now.

Committee members expressed their gratitude for this generous donation and look forward to post pandemic times when they will be able to see performances on the new stage, as well as seeing it set up in all its versatility as, for example, a catwalk for fashion shows or in tiers for a choir concert.