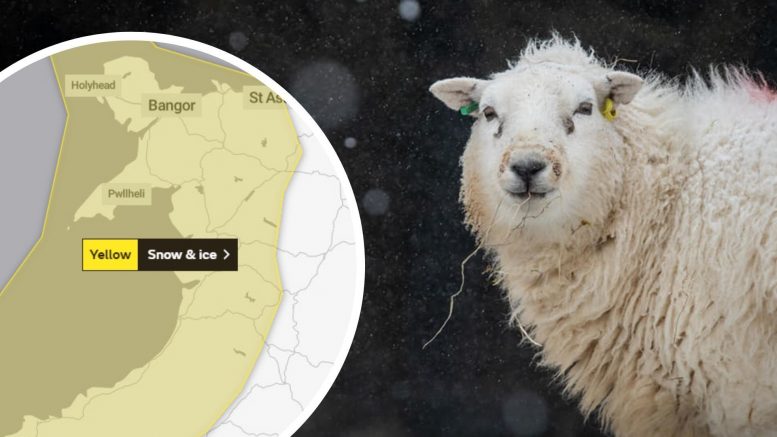 Snow and ice are expected over parts of mid Wales overnight and into Tuesday morning, forecasters said.

The Met Office said persistent wintry showers and windy conditions may lead to some travel disruption in the west in areas such as Machynlleth, Llanidloes and Rhayader.

Up to four centimetres of snow is expected in some places, mainly inland and on hills.

Chief Meteorologist, Dan Suri, said: “The Met Office has been signalling a dramatic change in weather type for several days, with very cold air moving from the Arctic through Sunday night, bringing snow showers and freezing overnight temperatures and all accompanied by strong northerly winds accentuating the cold.

“Although snow showers will predominantly affect the north and north west, they could occur almost anywhere in the UK early this week, at least temporarily.”

Temperatures are expected to remain below average for the coming week.

Phil Stocker is the chief executive of the National Sheep Association has spoken about the dramatic change of weather type over the next few days.

Mr Stocker said: “Sheep and livestock farmers, especially in the UK’s uplands, are acutely aware of the potential for a spring cold snap which can bring devastation and soul-destroying losses during lambing time.

“The sector has endured several cold weather events during recent springs and these have wrought considerable hardship to both stock and hill farmers. However, being aware of the approaching change in weather type will allow farmers to buffer the impacts by taking action to avoid the worst losses.”

This evening and tonight: Tonight will see wintry, often snowy, showers for many, though skies remain clear in the east and southeast of the country. Widespread frost developing. Snow showers heaviest along western coastal areas where ice is likely to form. Feeling cold. Minimum temperature -4 °C.

Tuesday: The wintry showers continue, turning widespread from midday, bringing snow to many across the country. Patchy cloud allows for some sunny spells, though still feeling cold in the wind. Maximum temperature 7 °C.

Outlook for Wednesday to Friday: Largely cold and wintry through this period, with widespread frosts. Some rain and snow Wednesday, but largely dry Thursday, with winds strengthening. Rain followed by widespread wintry outbreaks on Friday.