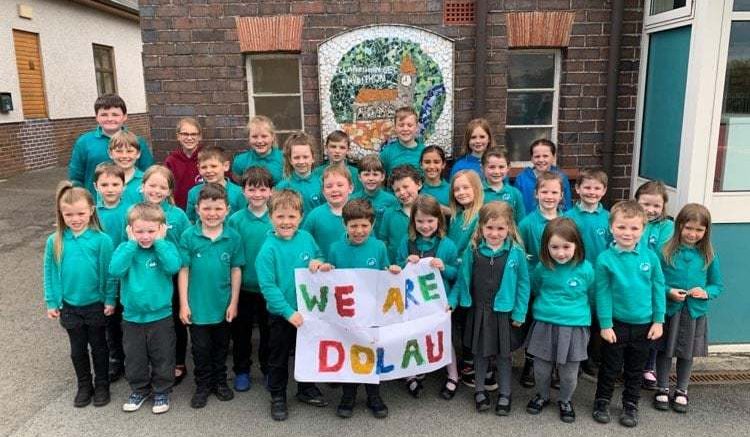 SUPPORTERS of a Radnorshire school threatened with closure are making a last push for people throughout Powys to oppose council proposals to shut it.

Llanfihangel Rhydithon Community Primary School in Dolau has been earmarked for closure by Powys County Council – one of seven throughout the county. And though the village, near Llandrindod Wells, has a tiny population of barely more than 200, school supporters have certainly been making their voices heard over the last few months. The Dolau School Action Group has been established in the wake of the council’s plans and they have been hugely active in opposing plans – organising scores of events, contacting politicians and even producing a heartwarming video in which a school jumper is passed down through the generations, from former to current pupils, and even those yet to enter education, but whose parents plan to send them to the thriving village school.

Consultation on Llanfihangel Rhydithon’s closure started on April 14 and will end next week, on Wednesday, June 2. And those campaigning to save it will be fighting to the last second.

“For the second time in five years the community of Llanfihangel Rhydithon has to fight to save its school from permanent closure, a Green ERW-rated school, the highest ranking in Wales, and with an ESTYN report rated ‘Good’,” said the action group in a statement.

“This is a decision made unanimously by the eight members of cabinet of Powys County Council. A school which only last year was described by (then education minister) Kirsty Williams as ‘an example of a good rural school’.

“A school of which capacity is full and a school which carries no financial debt. A proactive governing body and staff which have sought to provide children of the village and the wider rural community with a quality of education which is the envy of many so-called super schools within the county.

“The flawed decision to place Llanfihangel Rhydithon into consultation in the midst of a global pandemic shows the council’s desperation to close small rural schools, believing that the local community, due to Covid restrictions, would be unable to organise a structured response. However, this has only strengthened, and galvanised peoples resolve in the area to fight and keep their local school open.

“Over a number of years and under the proviso of numerous strategies, Powys County Council have systematically dismantled and destroyed many small local communities by closing their village school, in tandem ripping the heart out of a rural way of life.

“Llanfihangel Rhydithon is not alone in this. Transforming Education in Powys is a ten-year plan designed to close small village schools throughout the county, with four now in immediate consultation.

“These schools are the beating heart of our community, they are the very fabric of the society in which we live and we need to keep them open. So, when your local councillor is seeking election next May, perhaps we should all ask them, what did you do?”

The school is one of seven throughout Powys that the county council have proposed to close by the end of the 2021/22 school year. The others are Castle Caereinon Church in Wales School near Llanfair Caereinion, Churchstoke County Primary School, Llanbedr Church in Wales School near Crickhowell as well as three in Brecon – Mount Street Infants, Mount Street Juniors and Cradoc School.

Powys County Council says it is consulting to close Llanfihangel Rhydithon and the others from August 31 next year, with pupils to attend their nearest alternative schools if the proposals go ahead.

With next week’s deadline approaching, supporters of Llanfihangel Rhydithon are urging people to make their voices heard in the coming days.

To help show your support to save the school, complete the consultation in one of the following ways:

• Fill in the consultation response form online at https://en.powys.gov.uk/article/10580/Llanfihangel-Rhydithon-C.P.-School