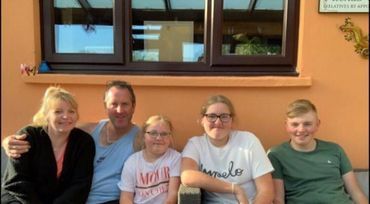 A CROSSGATES teenager who set herself a £500 target when she decided to raise money for a local charity in March is already set to smash the £2,000 mark.

It’s only March 8 and Ellie-Mae Morgan has already raised £1,925 – which she is going to be donating to Llandrindod Wells-based cancer charity the Bracken Trust. Ellie-Mae, 14, decided to raise the cash by walking 10,000 steps every day in March, in order to raise awareness of brain cancer that her mum Sam is bravely battling.

“For the month of March, I am walking a minimum of 10,000 steps a day,” says Ysgol Calon Cymru Llandrindod pupil Ellie-Mae on a JustGiving page she has set up for her march to 310,000 steps in March.

“I am doing this to raise money for the Bracken Trust and in honour of my beautiful and amazing mum for how brave and strong she is fighting a horrible disease called Stage 4 glioblastoma brain cancer.

“Ever since my mum got diagnosed, the Bracken Trust have been amazing and full of support for all of the family. As well as being a local charity supporting families with cancer, the Bracken Trust do so much for the community. In my opinion, they don’t get enough appreciation and it is for this reason that I have decided to do this challenge and raise money for the brilliant charity.

“I have set a goal of £500 and I would love to reach this, if you could please donate, even if it’s just £1, any amount will make a huge difference for this amazing charity who rely solely on donations and fundraising.”

The family’s world was turned upside down less than a year ago when mum Samantha, 42, was struck down when tests last May revealed the brain cancer after she’d initially gone to see her local doctor suffering from dizziness.

Before her diagnosis, Sam had worked in telesales for local health food distributor Mintons Good Food. But she has spent much of the last 10 months in and out of hospital.

“In May last year everything was normal, Sam was running half marathons and was fit and healthy,” said husband Andrew, who is father to Ellie-Mae as well as 18-year-old Calum and Evie, 10.

“Ellie is such a lovely kid, she wears her heart on her sleeve, and she wanted to do something nice for the Bracken Trust, a local organisation that does so much for people locally and has done so much for us as a family.”

Andrew also praised the help the family has received from the local Macmillan cancer nurse as well.

If you’d like to help Ellie-Mae on her march for raising money this month, visit her JustGiving page at https://www.justgiving.com/fundraising/ellie-mae-morgan.