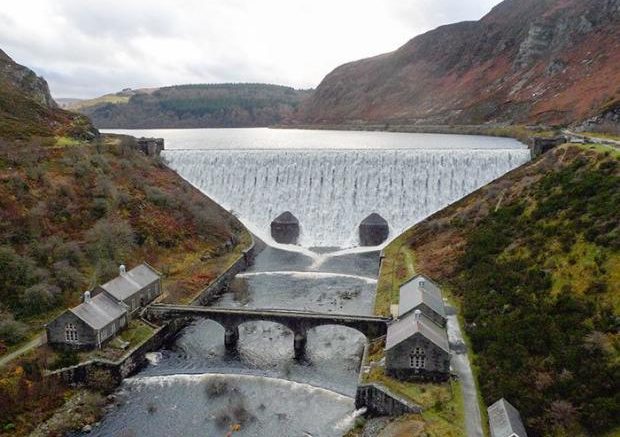 BY 1890 the great city of Birmingham was dying.

Mass industrialisation had seen the population mushroom with families from across the country descending on the city to work in its factories and mills despite the dire living conditions of the slums.

Disease was rampant and the city realised it needed a clean water supply.

In 1891 the city commissioned surveys and found the valleys of the rivers Elan and Claerwen in Radnorshire ideal for their purpose.

The choice of the Elan Valley as the source of Birmingham’s future water supplies was to lead to the creation of a spectacular new landscape in mid Wales.

However it was not without its controversy.

Only the affected landowners were to be given any financial compensation, and tenant farmers and smallholders were evicted without recompense.

Servants and other workers employed by the two large estates of Cwm Elan and Nantgwyllt also lost their income and wound up at Rhayader workhouse.

The flooding of the valleys led to the loss of two historic country houses, both briefly residences of the poet Percy Shelley, and of a church, chapel, schoolhouse, and 18 cottages and farmhouses.

Some 400 people were displaced by the Birmingham scheme.

The civil engineer Eustace Tickell went to work in the construction of Pen-Y-Garreg dam though he was torn between his job and his affection for the valley.

He wrote: ‘Beautiful lakes they will doubtless be but their construction dooms many a picturesque and interesting spot to destruction.’

The construction led to much excitement locally with hundreds employed.

A private railway was constructed which sawe eight locomotives deployed in moving 1,000 tons of materials a day while a village was built to house all the workers.

The first stage of the Elan Valley Railway opened in 1894, linking Caban Coch to the main Cambrian Railways line near Rhayader.

Work on linking the rest of the dam sites continued until 1896, including the narrow pass of Devil’s Gulch above Craig Goch where a new village was established for navvies and their families.

The village was even served by its own reservoir and dam, known as Nant-Y-Gro.

The stone bridge at Penbont Elan Valley by Mick Pleszkan.

The new village was purposely founded across the river from Rhayader and outsiders were banned from entering by a bridge keeper who guarded the village around the clock.

Newcomers had to spend a week on the other side of the river in a building known as the ‘Doss House’ before being permitted entry and work and residence in the waterwork’s village.

The nearby Elan Valley Hotel was built at this time and was to profit from liquor sales to workers on the waterworks scheme.

As work progressed so had the body count.

Despite having two onsite hospitals the work was dangerous with records of workers being crushed on the railways.

However the working village’s self imposed isolation had spared it deaths from a smallpox outbreak which ravaged the rest of Radnorshire in 1896.

By 1898 the newly built Nantygwillt school was served by its own railway service and attended by 1,500 children.

The new Elan village grew steadily, becoming totally self-sufficient with a post-office, stores, community hall, public baths, washhouses, and even a gymnasium all being provided for the workers and their families.

Over 50,000 men were employed on the construction sites over the 13 years of the waterworks scheme.

There had been a plan to build at least seven dams and the foundation of one unfinished project at Dol-y-Mynach is still to be found beneath the waters.

Caban Coch dam was described by Tickell as ‘when the storm water rushes over the crest and falls to a depth of over 120 feet, the dam at Caban Coch will present the appearance of a magnificent waterfall.

Meanwhile a small submerged dam at Careg-Ddu holds water back on the upstream side of the River Elan so that water can always be taken at the Foel Tower, which is the starting point of the delivery of water to Birmingham.

The dam at Craig Goch, the highest upstream of the series of dams in the Elan Valley, is often referred to as the ‘top dam’ and known as the most attractive of the dams built in the valley.

Meanwhile Pen-Y-Gareg completed the valley dams which were completed in 1906 – two years after their royal opening by King Edward VII.

The royal party boarded a special train running on the Elan railway at Rhayader station and travelled along the valley with the trackside lined with soldiers.

The King, using an ornate handwheel, turned on the new supply at the filter beds near Elan Village to send water on its way to Birmingham along the 73 mile long aqueduct.

The trackbed of the railway line travelled by the royal party survives today as a pathway alongside Pen-y-Gareg reservoir.

Of course no account of the Elan Valley would be complete without mention of the fate of Nant-y-Gro dam which had been redundant since the works were completed in 1906 with the navvies village replaced by a permanent settlement.

In May 1942 the dam was blown up by Barnes Wallis’ ‘bouncing bomb’ and his team of Dambusters used their experience in successfully destroying the Mohne and Eder dams in Germany in World War Two.

The remains of the Nant-y-Gro dam can still be seen today in much the same condition as it was left after the secret wartime experiments of 1942.

Less than a decade later and Claerwen dam was built with Italian workers employed in its construction and opened by the newly crowned Queen Elizabeth in October 1952, in one of the first official engagements of her reign.