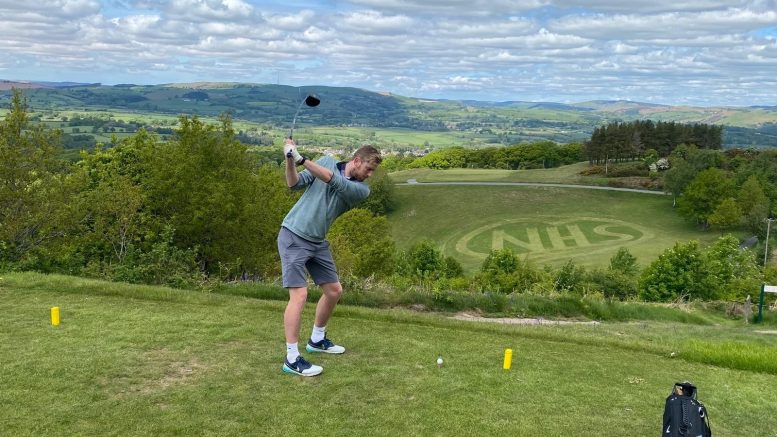 AN intrepid golfer will play four continuous rounds of golf this weekend – while walking the equivalent distance of a marathon.

Adam Farmer’s feat will see him essentially cram a full tournament of golf – like The Masters or US Open, which are usually played over four days – into roughly 12 hours. The 26-year-old Knighton man will tee off from Llandrindod Wells Golf Club at around 6am on Friday, May 21, and won’t stop until he’s completed 72 holes, which he is aiming to complete by around 7pm. Adam will be raising money for Prostate Cancer UK as it’s a form of the disease he feels isn’t as well-known as other types of cancer.

“I’ll be playing a marathon worth of golf in one day to raise money for this amazing cause. This is 72 holes, totalling a full marathon distance,” said Adam, who is taking on the challenge as part of Prostate Cancer UK’s Big Golf Race, where people can either raise money and awareness for by completing a full 26.2-mile marathon distance or a 13.1-mile half marathon (two full rounds of golf) course.

“I wanted to raise awareness as a few close family members, as well as friends, have suffered with cancer, and I don’t think there’s enough information about prostate cancer out there for men – even though prostate cancer is the most commonly diagnosed cancer in the UK,” added Adam.

Prostate cancer is a disease killing one man every 45 minutes in the UK – that’s the time it takes to play just three holes of golf.

Adam has chosen to take on the challenge at Llandrindod, where he is a member, with support from some close family and friends. He’s going to take a pit-stop here and there but will generally be playing non-stop, estimating each round will take three hours. He’ll start at 6am, hopefully finishing the opening round at 9am; the second round will be from 9am-12pm, followed by an hour for lunch, with the back straight taking him from 1-4pm, finishing with the last 18 holes between 4-7pm. It sounds like it’s going to be thirsty work – so it’s a good job Adam works for popular Knighton-based drinks company Radnor Hills.

“I want to raise awareness for Prostate cancer and help fund the amazing work this charity does for those suffering,” added Adam, who is procurement and planning manager at Radnor Hills, and also plays football for Builth Wells.

“I’ve had a lot of support from family, friends, as well as colleagues and supplier contacts, who have helped me raise nearly £2,000 so far. I’d also like to thank the board and catering department at Llandrindod Golf Club for their support, they’ve been superb.”

Adam’s total at the moment stands at £1,648, smashing his initial goal of £1,000. To donate to Adam’s cause, visit his Just Giving page at https://www.justgiving.com/fundraising/adam-farmer5.