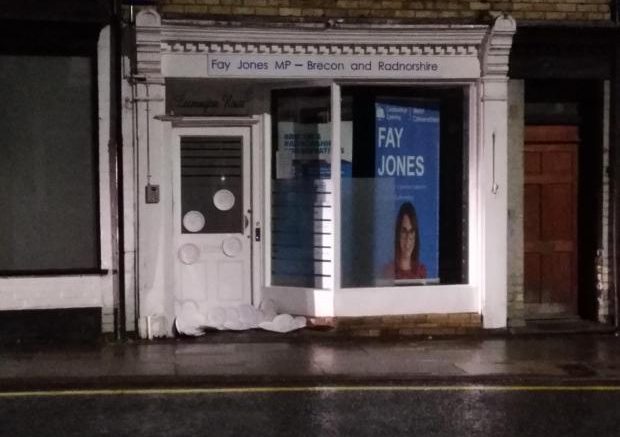 POWYS residents have let Brecon and Radnorshire MP Fay Jones know their feelings over the free school meals fiasco by leaving a hoard of paper plates outside her constituency office.

Around 30 paper plates – decked with messages supporting footballer Marcus Rashford and Labour’s bid to feed vulnerable children in England during the school holidays – were left in the porch outside Ms Jones’ Radnorshire constituency office in Llandrindod Wells overnight on Wednesday (October 28).

They were seemingly left in protest over Ms Jones’ support for the Conservative’s decision in Parliament last week to block Manchester United footballer Rashford’s bid to extend free school meals over the holidays.

Plates were decorated with various messages, including “Food for thought”, “Save a quid to starve a kid”, “Feed the kids” and “Let them eat cake”.

Ms Jones’ office said they were unaware of the protest at the Cardiff-born MP’s Radnorshire office, located at Leamington House, Temple Street, as they continue to work from home like many others, in line with Welsh Government advice. They declined to comment on the protest.

Ms Jones and Montgomeryshire MP Craig Williams have both been heavily criticised, along with many Tory colleagues, in the wake of the controversial vote last week.

The pair voted ‘no’ along with 320 other MPs, as the motion put forward by Labour was defeated by 61 votes.

Downing Street ruled out performing a late U-turn ahead of the vote, with Prime Minister Boris Johnson telling Prime Minister’s Questions: “We support kids on low incomes in school and we will continue to do so.

“But the most important thing is to keep them in school and not tear off into another national lockdown taking them out of school.

The vote does not apply to schoolchildren in Wales as the Welsh Government has already agreed to fund free school meals during the holidays – as have counterparts in Scotland and Northern Ireland.

More than a million people, meanwhile, have signed Rashford’s petition calling for children from poor families in England to receive free meals in school holidays.

The United and England forward, 22, wants the government to provide free lunches amid fears for incomes as coronavirus restrictions increase.