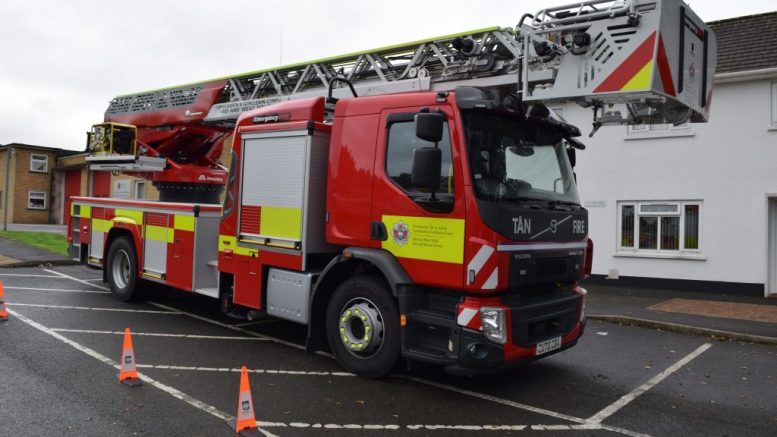 UPGRADES to aerial provisions at three of four fire stations across Mid and West Wales has opened up some old wounds, as fears resurface about the future safety of Powys residents.

News that specialist ALP (Aerial Ladder Platform) fire engines were unveiled at stations in Swansea, Aberystwyth and Haverfordwest this week has only served to reignite the debate about a “black spot” being created in Mid Wales after the removal of Llandrindod Wells’ ALP nearly two years ago – risking the safety of both firefighters and the public.

Llandrindod’s ALP engine – a firefighting vehicle designed for reaching greater heights – was decommissioned in May 2019 due to reaching its end-of-life cycle, with ongoing costs of maintaining it becoming “prohibitive”, according to the Mid and West Wales Fire and Rescue Service (MWWFRS).

The fire service had two more modern aerial ladder platforms based at Swansea and Haverfordwest and an older model, like the one in Llandrindod, at Aberystwyth.

But, earlier this week, vehicle providers Volvo announced that each of these stations had received upgrades – prompting criticism that the service was “not fussed on the safety of the public of Mid Wales” and leaving Powys exposed.

MWWFRS said that a decision to reduce the service’s aerial capability was made by the Fire Authority in 2012.

“The ALP at Llandrindod had reached its end of life and the ongoing costs of maintaining the vehicle had become prohibitive,” MWWFRS tweeted on Tuesday evening (February 2).

“The decision to reduce MAWWFRS Aerial capability from 4 to 3 appliances was taken by our Fire Authority in 2012.

“Further data and risk analysis undertaken in 2019 supported the decision taken and identified Swansea, Pembrokeshire and Ceredigion commands as the most effective locations for the disposition of aerial appliances for the whole service area.”

The service insists Powys will still have access to ALP engines, adding: “We would like to reassure you that communities in Powys will continue to have access to an Aerial Appliance, along with other specialist rescue appliances and equipment, to assist with the effective and efficient resolution of any incident.”

However, when the County Times first reported on the possible loss of the ALP in August 2018, an anonymous Mid Wales firefighter told us he feared the loss would cause a Powys “black spot” and estimated it would take other ALPs “well over an hour to get to us” in times of an emergency.

There is also an ALP in Hereford, which although part of a different fire and rescue service, often serves Mid Wales. Aerial rescue platforms consist of ladders which are mechanically operated and have a platform at the end for firefighters to stand on. The ladders are mounted onto a fire truck and help firefighters reach higher heights.

Kirsty Williams, Liberal Democrat AM for Brecon and Radnorshire back in August 2018, said then: “I raised concerns with the fire authority over what it could mean for people’s safety. Many people approached me with real concern, and I have no doubt that the confirmation will come as extremely disappointing news.

“There are significant distances to alternative platforms and it seems less likely our local firefighters will have access to the equipment they need.”

Both the Liberal Democrats and Labour set up petitions to save the ALP, but to no avail.