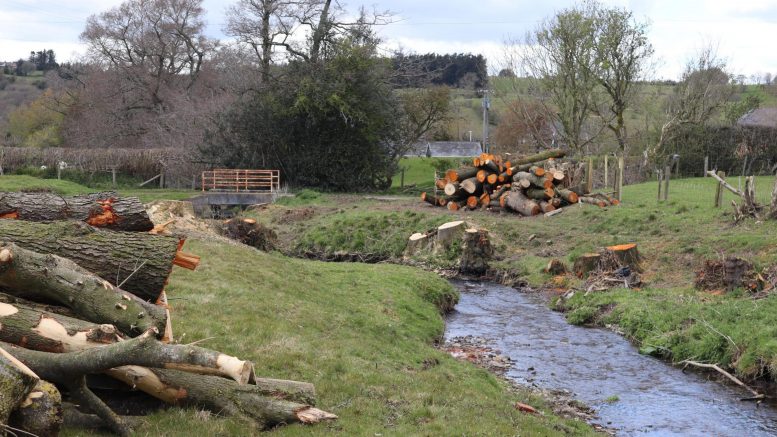 RESIDENTS in a rural Radnorshire village are raging over the “brutal” tree-felling programme which they say is ruining the local landscape and endangering wildlife.

People living in and near the village of Dolau were left angry and stunned last week when maple, oak, ash and sycamore trees – some more than 100-years-old – were suddenly chopped down as part of a “resilience cutting” by Western Power. The electricity distribution network operator said the tree-felling was part of a programme to “improve the electricity network performance under abnormal weather conditions” that Powys has been experiencing in recent weeks.

But locals are far from happy and have called a public meeting later this week. They say many of the trees are in leaf and are being scythed down during peak nesting time for local birds; that they act to maintain a river bank on a flood plain and that Western Power’s policy “makes a mockery” of any protection for the environment and wildlife.

Multiple complaints have been lodged by local residents, who say they have gained a small victory with the tree-felling temporarily suspended, while a meeting is taking place locally on Wednesday, May 12, where a Western Power representative has agreed to be attend.

“As part of their resilience policy, beautiful mature field maples, oak, ash and sycamore, to name a few, are in the process of being felled, some over 100-years-old,” said one resident, who didn’t want to be identified for fear of reprisals.

“This policy allows trees to be cut to the ground rather than trimmed back, according to a spokesman in the Western Power complaints department. While some residents have lodged complaints, we appear powerless to stop the relentless chain sawing of many trees in leaf and at peak nesting time for our local birds.

“No consideration has been given to the fact that some trees are maintaining a river bank on a flood plain. This policy makes a mockery of any protection for the environment and wildlife, to say nothing of the ruining of our landscape. Policy makers appear oblivious to climate change, yet we have just experienced the coldest April for over 60 years.

“‘Resilience Cutting’ is what they call it. It’s changing our landscape and everyone in the village is very upset about it. It’s not been done with any consultation or sympathy for wildlife. I know other areas where hedgehogs are coming out of hibernation.

“What they’re doing is brutal. Britain has such a bad climate change policy and, according to www.parliament.uk the UK has 11.7 per cent woodland cover compared to 44 per cent in Europe as a whole and 37 per cent coverage.”

“Western Power Distribution (WPD) are required to carry out resilience tree cutting across its regions, the clearances for this type of work are above what is required for our normal routine maintenance,” said a Western Power spokesperson.

“We carried out the work at Dolau, with the full permission of the landowner. We always use fully qualified and trained contractors to remove or trim trees.

“We are sorry to hear that this has upset residents living in the area and as such will be in contact with them to further discuss the work required to maintain a safe, secure and reliable network.”

“In Mid Wales, Western Power Distribution has duties to maintain safe powerlines. They operate under the Electricity Act and are classed as exempt under the Forestry Act.

“As Western Power is exempt under the Forestry Act, consent is not required from us to carry out tree felling, but they must still comply with other environmental legislation. While there is no offence for felling trees in the bird nesting season, there is an offence if they disturb nesting birds. Anyone who has concerns about this should contact their local wildlife crime officer in the police by calling 101.

“Trees play a significant part in combating climate change, but sometimes trees near to powerlines may be an unacceptable health and safety risk, or pose a risk to disrupting power. The scale of felling associated with powerlines is relatively low and will not have a significant environmental impact.”

Since originally speaking to us, local residents say the tree-felling has been temporarily halted ahead of the outcome of Wednesday’s meeting, whcih will be held locally at 5.30pm.