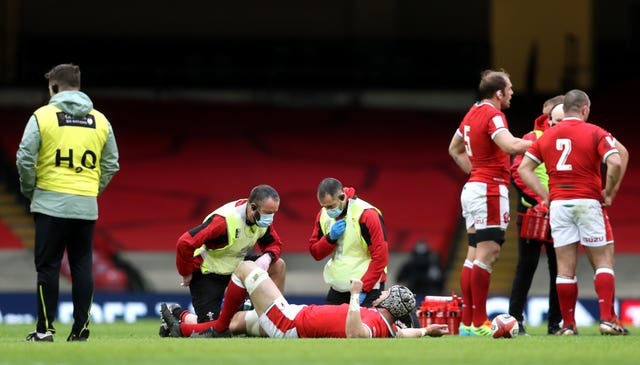 DAN Lydiate’s Six Nations campaign looks to be over.

However Lydiate was just one Welsh player to sustain injury at the hands of a physical Ireland side which played much of the game with 14 men.

Second-half tries from George North and tournament debutant Louis Rees-Zammit, plus 11 points from the boot of Leigh Halfpenny, saw the hosts capitalise.

Wales head coach Wayne Pivac admits the first major victory of his reign was tempered by suffering a series of injury problems which have left him “counting the walking wounded”.

“I am obviously pleased to get four points first and foremost. It’s game one, so to get off to a winning start was very important,” said Pivac.

“We have picked up a few injuries so we’re looking at those now. We’re sort of counting the walking wounded after that one.

“A six-day turnaround means certain players won’t be playing for us.

“Unfortunately, we lose a couple of players straight away.

“We’re going to get Lydiate scanned but it’s not looking too good. It could be an ACL but we’ll get that scanned for a definite result on that, but certainly very disappointing for Dan.

“Tomos Williams – we’re hoping that’s not a serious hamstring, but it won’t turn around in six days, I wouldn’t have thought.”

After a wretched 2020 brought just three wins from 10 Tests – two against Italy and one over Georgia – Pivac is eager to draw a line under previous results.

“We’re looking at it as this competition, not the amount of wins and losses since taking over the role,” he said.